Debbie Does Des Moines – But Please don’t pronounce either “s” 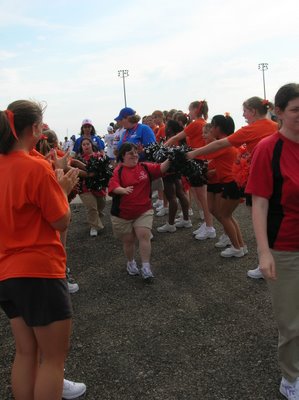 Ok, we won’t tell you who can’t pronounce “Des Moines” the right way, but today at the Special Olympics Cessna Citation Airlift we heard several different iterations. It didn’t matter though .. no matter how you pronounce it, the airlift via private donated jet – which brought 1800 athletes to Iowa for the games – brought smiles to everyone’s faces!! We all agree that we worry about STUPID STUFF every day .. just being here around all of these wonderfully positive and excited athletes humbles you.

I should start from the beginning …
Our trip to Ames for the 2006 Special Olympics US National Games started when Laura and I boarded our (small) Skywest plane for Des Moines. We were walking to our seats and spotted Carissa, who was already decked out in her khakis, white shirt & tennis shoes (our “uniform” while we are here, minus the white shirt because we all get Special Olympics volunteer shirts) .. she was real thrilled that we hadn’t told her that we didn’t need to wear our uniforms until today (Saturday)… She looked cute though so it didn’t matter.

The ride to Des Moines was smooth until it got really turbulent before landing. Carissa *almost* got puked on by her neighbor – this is no joke. We then got our bags but Carrissa’s wasn’t on our plane … I’ve decided Carissa has a really really good attitude because she didn’t bat an eye about it – I surely would have complained and whined a little at this point.

Shors came to pick us up at the curb and he was surprisingly calm and collected .. He took us to the airlift location across the airport tarmac near a hangar where the Cessna media briefing would take place in an hour. Wendy, John and Rebecca had been in Iowa for a full day already and started getting the rest of us up to speed about how we were going to help over the next few days. None of us had eaten … and were starting to feel a little famished. Tons of media showed up for the briefing, when they learned about where, when, why and how they would cover the airlift. Wendy was Marilyn’s (VP from Cessna) assistant .. holding up a map of the airport so reporters could see exactly where they could go for the airlift. She was lovely!

After the airlift Wendy & John were summoned to a meeting. It was 4pm and the rest of us went to scarf down Arby’s sandwiches and curly fries for “lunch” (after almost eating our arms) and to shop at Target. Laura & Carissa got cute backpacks for carrying essentials over the next few days, Debbie & Laura got see-through rain jackets (mine: white, Laura’s: a pixie purple) and we purchased 5 umbrellas in case it rained during the airlift. Suffice it to say .. we are returning everything except the backpacks. 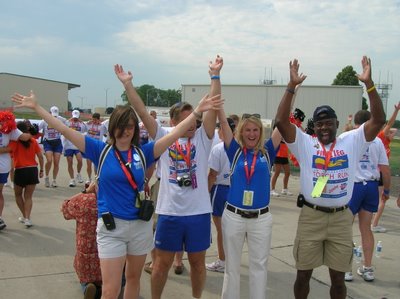 We headed back to the media center to pick up our credentials and shirts … and participate in a meeting with folks from Two Rivers Marketing (from Des Moines) and Special Olypmics International PR team. We were talking about handling media during the airlift and about the Today Show segment that will be airing live tomorrow morning (!) – look for photos after tomorrow of the big event. I’m also producing a B-Roll package .. it was fed out today with airlift and SO file footage, along with sound bites, and we know that there are about 30 stations who said they wanted to download it off of the satellite (it fed out at 1 pm CT), as well as CBS Newspath! We’re also going to put a second B-Roll package with even more footage on satellite for TV stations on Monday at 1pm CT. The good news: CNN has already said they want to download the feed! I’m also working with the nicest B-Roll crew in Iowa – everyone is nice here – but they are exceptional. 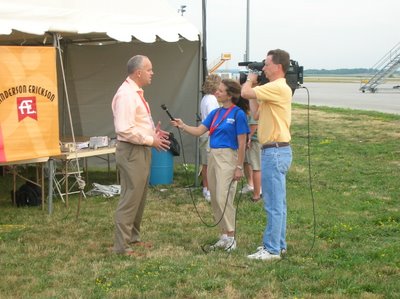 Speaking of good media coverage … the airlift today was covered by all – and I mean ALL – of the media in Ames and Des Moines. As the planes were coming in to drop off athletes from literally every corner of the United States, the energy was amazing. Athletes and coaches got off of the planes to cheers, chearleaders from local high schools greeted them as they came into the hangar, a band played music and everyone was hugging everyone! I can confidently say that none of us has hugged or been hugged that much in a long time .. and how inspiring it was!!

These athletes, most of them really articulate, want to share their stories and learn more about us too. They are so wonderful. One athlete noticed that I had a microphone in my hand .. and came up to me and shared that her dream is to be a Telemundo reporter. She has an incredibly positive attitude about life and I have no doubt that she’ll probably make it happen! These athletes don’t know to be discouraged .. or insecure .. or embarrassed. They just love .. and laugh .. and express their excitement at being here. Some of them flew today for the first time, left their homes for the first time … and experienced everything with huge smiles on their faces. We all walked away better people having met them.

Oh, by the way … Carissa’s bag showed up at the hotel last night, right before a United representative called to tell her that they couldn’t deliver it because they didn’t have a complete address of the hotel .. go figure.

We are excited to see what tomorrow brings for all of us ….