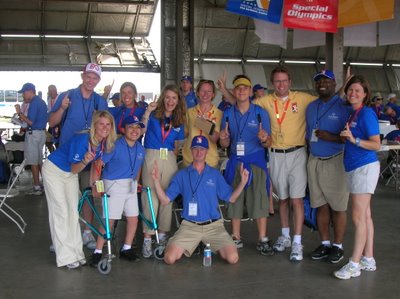 Well, today marks one of the most heartwarming and humbling experiences I have had in my life. John, Wendy, Debbie, Rebecca, Carissa and I started the day at 6 a.m. on the tarmac at the Des Moines airport. We spent the past 12 hours working with the media as they covered the 230 Cessna Citation planes that flew in more than 1,800 Special Olympics athletes and coaches from across the country. These planes took off or landed every 60 to 90 seconds and, for most of these athletes, it was the first time they had ever boarded a plane — much less a private jet.

Today, Cessna Aircraft Company just pulled off one of the largest private airlifts in history. I’m still amazed it all came together – even after 14 months of planning. It is fairly incredible to think how many corporations from all over the U.S. donated their planes and their pilots to fly these athletes in and out for this event. The pilots and the athletes definitely form a strong bond during the flight – lots of hugs and high fives as they leave the plane to board the bus.
Thirty-eight years ago this July, Special Olympics began at Soldier Field when the city of Chicago, Chicago Park District and Joseph Kennedy Jr. Foundation staged the first Special Olympics International Games with 1,000 athletes with intellectual disabilities from the U.S. and Canada. Now it’s a worldwide movement with more than 2.3 million athletes in 150 countries. I expected much younger athletes but most were young adults who definitely had more energy than our entire group put together. 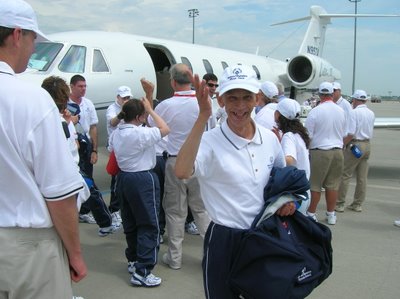 We spent the day with members of the United States Law Enforcement Torch Run® (LETR) Final Leg team. A group of law enforcement officers and Special Olympics athletes from around the country have spent the past few weeks carrying this “Flame of Hope” from Soldier Field to Ames. As you can see from the photo, they were definitely there to help keep spirits high as the bathroom lines got longer and the temperature got hotter. They also were quite fond of doing the Macarena with the Ames High Cheerleaders. Who can blame them? They had been running for the past four days. I, too, might dare to dance the Macarena just so I wouldn’t have to run another mile. 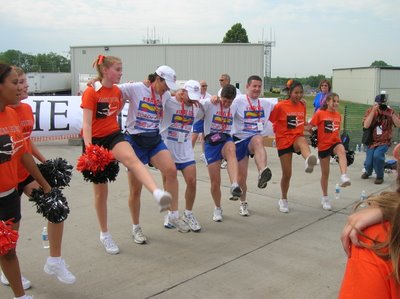 But the athletes… they put it all in perspective.

We spent some time with Joshua, a 15-year-old basketball player from Denton, Texas. Once he learned I grew up in Oklahoma, he went into great detail about Pow Wows and even demonstrated his amazing warrior calls. His mom and seven-year-old brother drove for 22 hours just to meet Joshua’s plane. Michael, 35, is competing in bowling. I told him he definitely was going to blow my bowling skills out of the water. He told me to come on over and try it. I think I just might. Or I will send Debbie. Her score was ‘6’ the last time we bowled together. Yep, 6. 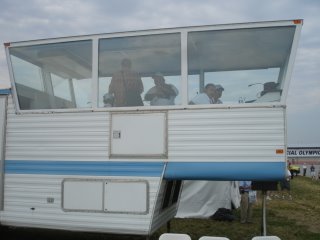 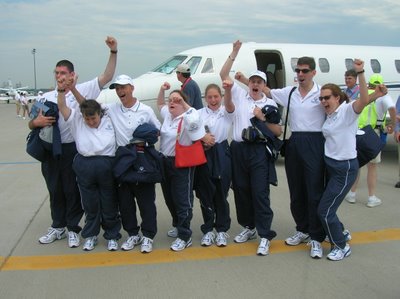 Tonight we drove back to Ames to work at the media operations center on the ISU campus. Tomorrow, more than 3,000 Special Olympics athletes from all 50 states will participate in Opening Ceremonies and spend the next five days competing in 12 Olympic-style sports. We are watching the dress rehearsal for the opening ceremonies on the closed-circuit TV. I’m fairly confident there won’t be many dry eyes in the stadium tomorrow night.

The Today Show is live tomorrow morning so we are planning on another early morning… Carissa threatened to make a GROUNDFLOOR MEDIA sign. Debbie thinks she might be burned at the stake. We are just going to get Starbucks instead. I guarantee we will need it.

Shors may need to start drinking coffee… check out his legs. Someone forgot sun screen. We made him feel better at the Thai restaurant in town and bought him a few Singhas…. 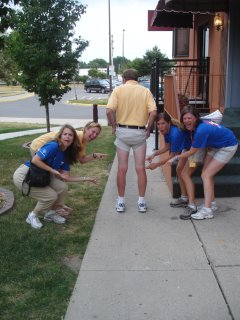 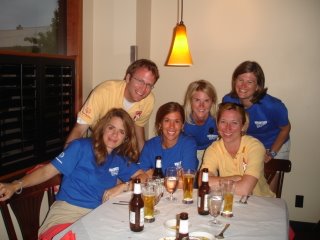