If it’s Sunday, this must be Ames… 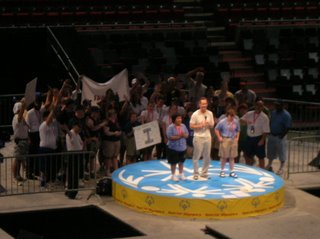 So, it’s only 9:25 a.m. and I think each member of the GFM team has misted up at least twice this morning. “Mister” no. 1 – watching Team Iowa and Team Illinois march into the Hilton Coliseum for an appearance on Weekend Today with Iowa native and weatherman Sean McLaughlin. The teams were decked out in their uniforms, armed with homemade signs and beaming smiles. Although it’s cloudy and rainy here in Ames this morning, I think there were sun beams radiating from the Coliseum during the segment!

Laura and Rebecca took the opportunity to chat with a few athletes from Illinois, trading pins and making new friends. They met two amazing women named Georgia and Amelia, both eloquent and energetic athletes from Illinois. Georgia is a swimmer and Amelia competes in power lifting. Amelia has a long history with Special Olympics, and actually carried the torch during the first international Special Olympics at Soldier Field in Chicago. 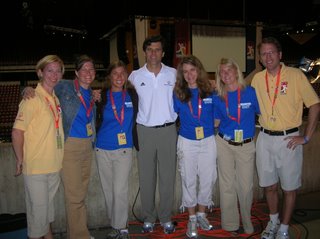 Debbie spent the morning buzzing around and grabbing excellent interviews, which included a few minutes with Georgia and her proud dad – later with Amelia and her inspirational story. Recognize the handsome, Camelot-like features on the guy in this photo? No, not John (although of course we think he’s handsome.) Debbie landed an interview with Tim Shriver, Chairman of Special Olympics, International. The GFM team got a picture with Tim after we made poor Wendy run the stairs in Hilton Coliseum to join us. (I personally enjoyed Tim joining in on the “Hurry up Wendy!” calls as we were standing at the ready for our photo op… Wendy’s a good sport, and amazingly quick up a flight of stairs!) 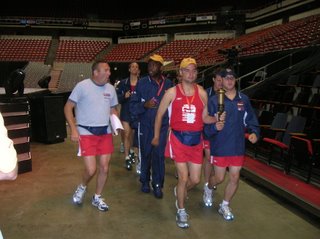 After the Shriver interview and the Weekend Today segment, the Torch Run organizers started their practice run into the stadium. (That’s right – “mister” no. 2.) The words to the music alone got us started – and the torch runners really sealed the deal. Wendy, Laura and John admitted to misting up last night while watching “Deep Impact” (oh wait, Laura just admitted they were ‘sobbing’)! Guaranteed to see lots of tears tonight. 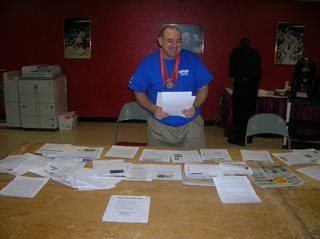 We have a new friend and media team member – Ronnie, a Special Olympics athlete from New York. Ronnie is a great help and has been tracking Google hits for the National Games. Here’s a photo of Ronnie and his “spread.” He wants to get 50 notebooks going to track coverage state-by-state. He also wants to hold daily 8:30 a.m. meetings and is trying to organize some “security” for the media… He’s pretty energetic and couldn’t be more enthusiastic about having joined our team! We’ll see if we can keep up with him. He might have to post the next blog while we take a nap…

“Mister” no. 3 (I know, I said there were only two…) – we just returned from a visit to the local Starbucks. (Funny how coffee can inspire tears of happiness after just 5 hours of sleep.) Laura is our official chauffer in Ames and has needed a little help with directions – but somehow Laura and our trusty Camry have a homing device with directions to Starbucks. If the car and Laura are missing, I have a hunch we’ll know where to find them.