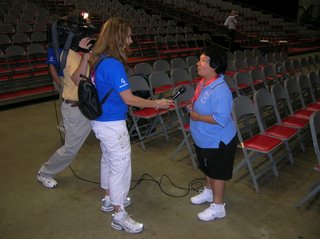 We were up this morning at 5 am .. Laura called me in my room because their power went out and they were worried we would all miss our alarms. I woke up just before 5 am anyway because it was raining hard outside. We all got pretty and drove to the Hilton Coliseum for the Today Show segment. The entire Special Olympics team from Iowa woke up early to be in the segment with Sean McLaughlin, the weather reporter. Sean grew up here in Iowa and it turns out he went to college with the video crew we are working with to shoot/edit the B-Roll footage. They had a reunion this morning .. AGAIN, everyone is SO NICE HERE. I can’t help but think that if these games were in a large metropolitan area we might not be interacting with people who are as laid back and genuinely happy to help at every turn. Now we understand why the Special Olympics decided that Ames, Iowa would be a good place for the national games. Not to mention that Iowa State University is the perfect venue, and so easy to navigate. 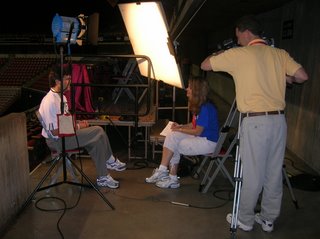 After the Today Show interview, I interviewed Tim Shriver. His mother, Eunice Kennedy Shriver, started the Special Olympics in 1968. I was a little nervous … and when I introduced myself I said “Hi, I’m from Debbie, how are you?” Oh my, that was embarrassing. He’s so nice though .. we got a nice chuckle at my expense. Then I explained to him that I just needed a few sounds bites for a B-Roll package. He’s obviously used to doing interviews and as the Chairman of Special Olympics gave me the sound bites I needed in about 10 minutes. Ok, I will also admit that he’s very handsome and I enjoyed that interview very much. The GFM crew then got a photo with him .. how could we resist?

Tom Arnold is coming to the Hilton Coliseum for rehearsal in about a 1/2 hour. We also need him for the B-Roll (and hopefully I can figure out how to introduce myself by then). Hootie and the Blowfish is supposed to be around soon too. Apparently the whole band does the interview together or nothing .. so that will be interesting to get 6 band members in the frame. Hmmmmmm, can’t I just have an interview with Hootie? Eunice Kennedy Shriver will also be here today and I would love to get an interview with her, but that is a coveted thing and the jury is still out on whether they’ll let me get close to her. Her son will probably warn her against it 🙂 since I grilled him so much.

Opening Ceremonies starts at 7:30 pm. From the looks of rehearsal over the last few days, it’s going to be AMAZING. Performers, musicians, speeches, the final torch run and torch lighting .. and we’ve been told to be prepared with lots of tissues because we won’t be able to last the first second without tears. We already had many hugs from athletes this morning. They continue to inspire us … Media from all over the country will be here tonight so we will be busy. They can interview outlets and do live shots from outside the coliseum and then they have to stay in one spot to get video during the ceremonies up in the mezzanine. We have a pool feed available for them so crews can pull audio and video .. so stay tuned and watch out for hits!!

Tomorrow morning the Today Show is scheduled to air another segment about the Bass Family who are here with four kids who are participating in the Special Olympics. The Today Show went to their home a few weeks ago to spend two days shooting video of them for the segment. They are a perfect example of what the Special Olympics are all about … Gail and Steve Bass have several children and then adopted four kids with intellectual disabilities. Three of them are on the North Carolina soccer team and one is a coach. The story should be awesome and we are really excited to see how it turned out.

Thanks for reading .. more later … deb