Making us all feel special 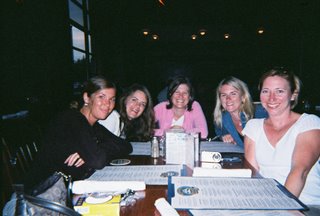 I didn’t post a blog like the rest of my fellow “blue shirts” during the first days of the inaugural Special Olympics games, so thought I’d toss this one up in retrospect. It was written from a worn seat at the Des Moines airport bar… the bartender is now a good amigo for the deals and last-minute favor.

Tom Arnold half joked to Debbie during the B-roll interview that he expects more hugs this week than what he got from all three of his wives combined (and no dog-gate to hit “you know where”). While I’m not sure if that includes his young attraction du jour, I think our entire group – and every other Special Olympics contributor – can relate to his sentiment.

And hugs are just icing on the cake…warm hearts, instant friendships and pure positivity are rampant in Iowa this week and have enveloped us all like fuzzy blankets. We’ve all treasured swapping state pins with the athletes (I think we might even be more eager to fill up our lanyards), high fives that turn into lingering hand shakes, the practicing athlete that flirtatiously greets us with a “hiiii ladies!” as he swells his chest, and the unassuming soccer, track, golf, swimming and bocce boasts.

Uplifting Airlift
The airlift in Des Moines was amazing on so many levels. You know from other GFM posts that we experienced the thrill, novelty and euphoria right along with the athletes. The reporters we escorted on landing strip were equally moved. The AP photographer darted to 10 Cessnas in a row to watch the doors swing open and the athletes – grinning ear-to-ear – step off pumping their arms to a level of applause fitting for their new-found rock-star status. It should be a more common occurrence in our worlds. We beamed right back and cheered on their arrival. It’s sad to think that we were taken aback when loving, total stranger athletes threw their arms around us at first sight. It made you forget about the bad stuff in the world for a minute.

Kathy, the Des Moines Register reporter, hadn’t reached the runway before shedding tears at the sight of proud athletes high-fiving their way through the rowdy cheerleader line. Her eyes leaked again when interviewing the 75-year-old brother and sister volunteer duo doling out cookies in the blazing heat – they had baked 2,000 of them in all varieties to boost the athlete’s energy. We all enjoyed chatting with 15-year-old Joshua whose Native American chanting impressision fooled us on his ethnicity. Wendy held her ground as she engaed him in pow-wow, cowboy and pioneer conversations.

The crackerjack GFM team of John, Wendy, Laura, Carissa and Debbie helped make the amazing airlift media coverage a reality, but I doubt any of us would refer to the tiring and steamy 13-hour day as work. That said, Laura was forced to fend off a plane owner who mysteriously lost his wedding ring, Wendy couldn’t commit to an athlete’s request for a Donald Trump introduction, and John ended up with a true farmer-style sunburn on his calves that earned our empathy in a rousing round of laughter. We rested our aching cheeks (from smiling) and feet over a few Singha beers and some spicy curry at a new Thai joint on Ames’ main street before retiring back to the cozy Baymont hotel.

A big pat on the back to John for not only writing an amazing novel that’s being re-released, but for also being the central focus of a six-minute NPR interview. (We PR people count minutes and seconds). Carissa lent the humor of her book club group who were enthralled with naan and sex. Take a listen at: http://www.onthemedia.org/

Rehearsal Day
Did I actually sleep last night?? I now know what it means to catch a couple of winks because we were back up at 5 am this morning after a quick and stormy rest. We slammed some java in the lobby and bolted to the Special O headquarters for the Today Show taping. It was impossible to complain after another round of jovial hellos and high-fives from the Iowa and Illinois teams who gathered as the show’s backdrop. The dreamy Mr. Tim Shriver who was a Today Show guest and a Special Olympics VIP made it very easy to keep our eyes wide open too with his classic Kennedy family looks and charm. Lucky Debbie got face-to-face with him for a while (for a B-Roll interview) as the rest of us passed around the Kleenex to catch our drool as we cozied up for a pic. His mother Eunice formed the Special Olympics in ’68. His sister and Ah-nold were absent.

Today Show weatherman Sean (pron. Seen) McLaughlin predicted 85 degrees today. Despite the cooler temps, I think we all were glad to be “manning” the media operations center and not pounding the pavement. 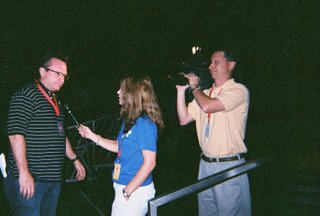 Next up at the Hilton Coliseum was the opening ceremonies rehearsal. I was eager to catch what I could since I’d be jetting off before the rest of the crew. After listening to Ronan Tynan belt out a spine-tingling rendition of God Bless America to an empty auditorium, Tom Arnold was next at bat. He’s a pretty damn funny Iowa native and Hawkeyes fan. You could sense his true love for the athletes as he posed and signed autographs. He then took to the stage and ad-libbed with Eddy from the movie “The Ringers.” Debbie and I related to his interview comment about loading on pounds in Iowa. He then traded his horizontally striped polo for an all-black version – a good call.

I will not spill the beans on Carissa’s tendency for communicating at midnight, John’s interesting choice of overnight bags, nor Laura’s pants drying on the Camry’s rear, but rest assured it was a Midwest trip we’ll all remember. In the future, we might tote a 100-in-one memory card reader and cuter khakis. 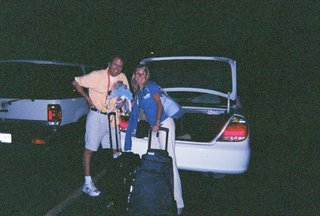 I was sad to be the first one to depart, and before the Games officially kicked off the competitions, but I must admit that real sleep was nice. Thanks to Laura and GFM for letting me experience the SONG. Many cheers to Wendy and John for their remarkable planning and execution and continued dedication. They made us all look good! May iced cheeseballs and the world’s largest lasagne keep you strong.

Listen to our discussion on corporate social responsibility with winners of the Civic 50 award, which recognizes Colorado’s most community-minded companies.