Times certainly are a changin’ 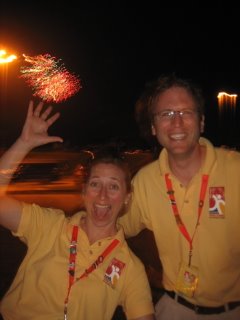 “Well, this is my first-ever blog entry. Times certainly are a changin’.
It’s July 13th, and Wendy and I have been back from Iowa for a few days now. I think that we’re both finally recovered from ten days of nonstop action. I don’t think that I’ve ever been on my feet as much as I was this past week. Keeping 200 or so reporters happy over a ten-day period (in addition to doing a thousand other things) didn’t allow for much rest. My phone would start ringing at 6 a.m. and wouldn’t stop until about 10:30 p.m. I think my U2 ringtone was pretty much driving everyone crazy by the end of the event.
Highlights?
Well, I’d say that one would be Ronnie. He was a former Special Olympics athlete and had paid his own bus fare to Ames (his family didn’t want him to make the trip so he did it on his own). Ronnie was autistic, and reminded me of Dustin Hoffman in Rainman. Ronnie volunteered in our media operations center, and was always excited to send out press releases, and alert the New York media of breaking news. He was full of gossip, rumors, etc., about all of the celebrities who he was convinced were going to descend upon Ames, Iowa. Ronnie was quite a character. At one point, he turned to me and very enthusiastically said, “I’ve got a great idea, John. Tonight, you and me go out to dinner. Your treat.” Wendy and I later took him out to Kentucky Fried Chicken and listened to all of his excited chatter about the New York basketball team, which was playing Florida in the championship. It was quite enlightening to work with Ronnie, and Wendy and I are going to keep in touch with him.
What else?
I saw so many amazing things over this ten-day period: a young girl leaping into her family’s arms after she won the gold medal in tennis, a woman speaking of how her classmates used to tease her and how it made her determined to succeed, basketball players helping each other off of the ground after intense collisions, a South Carolina soccer team composed entirely of people who were not only intellectually disabled but who were also deaf, siblings crying as their brothers or sisters competed to the best of their abilities, scores of athletes coming up to us and profusely thanking us for all of our support, etc.
In short, it was great to use PR to promote such a wonderful cause. The work our team did made a big difference in this event (for instance, our work helped lead to more than 11,000 people offering to volunteer), and it was gratifying to be able to work hard on behalf of such a phenomenal event. Wendy, Debbie, and Carissa were fantastic. As were Laura and Rebecca, who volunteered for several days.
I think we all learned a lot from this experience and are better people because of it. – John