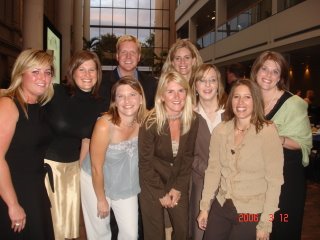 September 21, 2006 – The Colorado Chapter of the Public Relations Society of America handed out its major annual honors Thursday night during the gala 2006 Gold Pick Awards Ceremony, held at the Denver Museum of Nature and Science. GroundFloor Media took home four Silver Pick Awards for our work with Starbucks, Morris Animal Foundation, Zima and Umbria. A big thanks to our clients, Phil Smith of Starbucks and Angie Hoagland of Zima for attending the ceremony with our group. Jen Wills was also recognized for her hard work on the PRSA 2006 committee – even though we had to practically force her onto the stage. I almost set the table on fire, but Jenny saved the day. We think Ramonna was sitting with us, but she spent her entire time working on her Blackberry and Sarah made GFM proud during the trivia portion of the night.