Last weekend, Stephen Price traveled back to his old stomping grounds in San Francisco to race in the San Francisco Oyster Urban Adventure Race with old friends, Kathy Longaker and Andy Tubbs, as Team GroundFloor Media. After plenty of carbo-loading – food and ‘beverage’ on Friday night, they took it easy and prepped for the 8am start Sunday morning. What is an “urban adventure race”? Think of a mini-Amazing Race/scavenger hunt where teams make their way all over the city by foot, bike, skate, kayak,… searching out checkpoints, solving riddles and whatever else is required.

Team GroundFloor Media arrived at the REI parking lot (transition area) about 7:15am – plenty of time to set up food, water, bikes, skates and prepare mentally for the 40-50 miles of racing to come. At 7:55am all the teams were given the first ‘clue card’ – make their way on foot to Coit tower and find out from there what is next. Team GFM started out strong and was the 2nd team to arrive in the Coit Tower parking lot. The mystery clue was hidden 2 blocks away, taped on a car that led the teams to Chipotle – too bad it was closed! From there it was a sprint 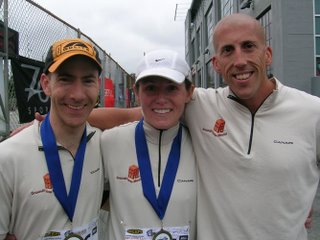 back to REI to get the 2nd clue card – Team GFM arrived 10 seconds behind Team Outward Bound, but laced up the skates faster and left the transition area in first place. By the time they returned from the skate along the Embarcadero with the required Pier 39 brochure, Team GFM was leading by 25 minutes.

The rest of the morning was spent paddling in the bay, riding bikes to the Golden Gate Bridge, running to the top of the windiest street in San Francisco – Lombard, and visiting Ghiradelli Square for some chocolate. The race directors threw a wrench into the whole thing when they allowed the teams to split up and perform individual tasks – one person on foot, one on skates and one on a bike. Stephen Price ran out of REI on foot in search of an oyster – a real oyster – anywhere he could find one. Two dollars and one fancy restaurant later – he returned back to REI and was soon joined by Kathy and Andy having returned from their missions.

One short run later, Team GFM returned to the REI parking lot, having won the inaugural San Francisco Oyster in a time of 5 hours and 13 minutes (over an hour ahead of the 2nd place team). Overall the event was a huge success – everyone had fun and lots of money was raised for Outward Bound. Thanks to Laura for supporting Outward Bound and Team GroundFloor Media!!!