He’s my Brad Pitt of the News Media

It is true, Tim Russert is at the top of my list of people I would love to have dinner with. I don’t know if it’s his slightly disheveled look, his love of the Buffalo Bills, his ability to ask hard questions at exactly the right time, or the twinkle in his eye that he gets when talking about the enormous respect he has for his father Big Russ; but I always thought that it would be great to have dinner with Tim Russert. 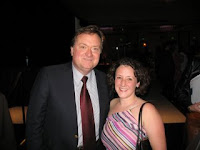 I finally got the opportunity to dine with him, along with 755 other people, as the Denver Press Club honored Russert with the Damon Runyon Award. I really wanted to show up with a white board, or a poster of red and blue states that I could hold up in American Idol fashion, but instead, I kept myself in check and sat quietly in the back as Adam Schrager of 9News emceed the event. Lots of exciting things were announced that evening—scholarships given to several journalism students, the Press Club announced positive financial news, the Colorado chapter of PRSA celebrated its 50th Anniversary, the Mayor proclaimed April 13 Tim Russert Day (I have added to my calendar to celebrate moving forward), and finally, the moment I had been waiting for, Tim Russert received the Damon Runyon Award.
Granted, part of my dinner fantasy is to be sitting there as Tim Russert tells me his personal political views, but true to Russert form, he was the consummate professional. He told some funny stories, expressed gratitude for the award, and made his excitement known surrounding this historic election, but most importantly he discussed why it is his job to make sure that he asks the questions to get the answers Americans need to know to make informed decisions. His speech was wonderful, he was exactly the person I hoped he would be, but unfortunately time ran out and he wrapped up his comments for the evening.
As most of the guests filed out of the ballroom, I bee lined for Russert’s table in the hopes of getting a memento from my “dinner date” with Tim Russert. Giddy with excitement, I got my picture taken with Tim Russert, a moment that will go down in my own personal history.