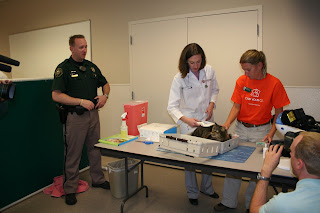 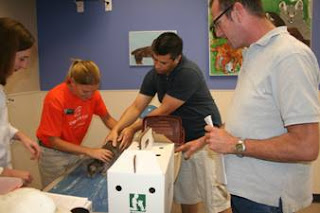 Get on the cat-wagon and take advantage of 150,000 free microchips for cats in metro Denver.

My colleague, Amy, will be the first to admit that her two dogs are microchipped, and her old cat (that she had for 16 years before he passed away) was not. She thought since her cat often never left the couch that he wouldn’t need to be found. But in reality, fewer than 10 percent of cats that are brought to shelters are ever reunited with their owners. The rate of reuniting dogs with their owners is two to five times higher than with cats.

So cat owners in metro Denver now don’t have any excuses. Time to get your cat chipped! Yesterday, the Denver Area Veterinary Medical Society (DAVMS), Dumb Friends League and participating members of the Metro Denver Shelter Alliance launched the CHIP YOUR CAT™ year-long program to provide 150,000 free microchips and lifetime registration for cats residing in the six county Denver metro area (Adams, Arapahoe, Broomfield, Denver, Douglas and Jefferson counties). The launch event was held at the Dumb Friend’s League Quebec Shelter and more than 28 cats showed up for free chips. The microchip procedure is simple, routine and virtually painless, and it doesn’t require any anesthesia. The microchip is the size of a grain of rice and is injected just under the loose skin between the shoulder blades. The kitties at the event were braver than I was. The first time I saw a cat chipped I was waiting for the claws to come out. It was rather uneventful. The procedure is similar to a routine vaccination.

PICTURE CAPTION: Officer Kent Ferris of the Jefferson County Sherrif’s Office with Mr. Hudson the cat at CHIP YOUR CAT launch event at the Dumb Friends League. Mr. Hudson had been adopted by the Ferris Family eight years ago and lives with two German Sheppard’s.