It’s not often that news outlets apologize, and if they do, it’s a brief hidden in eight-point text on page 17.

But media conglomerate News Corp.’s UK newspaper division very publicly apologized for the racy News of the World’s hacking into private voicemail accounts of celebrities and sports and government figures in an attempt to uncover scoops. 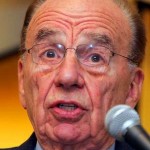 News Corp., parent of The Wall Street Journal and headed by media mogul Rupert Murdoch, on Friday offered its first mea culpa on the hacking charges that go back five years. Leading up to the statement, News Corp.’s newspaper division had downplayed the tactics.

In its statement Friday, it offered an “unreserved apology” to victims of the phone hacking scandal.

“Here today, we publicly and unreservedly apologize to all such individuals. What happened to them should not have happened. It was and remains unacceptable.”

The division is in the process of paying out damages to some of those affected. And Britain’s police are conducting a criminal investigation.

There are a couple of points to be made about the unprecedented apology by the largest British tabloid.

To get some ethical perspective on the hacking and subsequent apology, I spoke to Kelly McBride, a senior faculty member at the Poynter Institute. Her expertise is in ethics, reporting and writing for the journalism think tank in St. Petersburg, Fla.

McBride, who has worked in a variety of newsrooms, including the New York Times and Washington Post, puts it quite simply: “Journalists must abide by basic standards in gathering the news. One rule states that you cannot use illegal means to get information.”

She said that journalism’s primary principle of seeking the truth gets distorted when you lie, cheat or steal to get it. Even when the issue is of national importance, and would affect the public’s right to participate in democracy, the bar remains high, and might even be higher, for how information is gathered.

Back in reality, where journalism rules are sometimes conveniently forgotten by news outlets – whose existence more and more relies on getting the next big scoop –ethics fall by the wayside. McBride says the biggest violators are the growing number of outlets that are providing information to the public trying to sneak under the umbrella of journalism.