PR Pros: Don’t even try to pitch a story this week

Get ready for a week of nonstop coverage of Osama Bin Laden’s death.

Reporters will be digging deep into their source books for people they interviewed in the days and weeks following 9/11. We will have terrorist survivors, former military intelligence officials, first-responders, and college professors. They will be asked these questions: How does it make you feel, and what does it mean?

It’s been a long time since we’ve had a truly breaking news story, perfectly revealed during prime time. And this one was a doozy.

When television stations broke from coverage Sunday night almost simultaneously to each take credit for confirming Osama Bin Laden had been killed, the nation stopped and listened.

And we will keep listening. 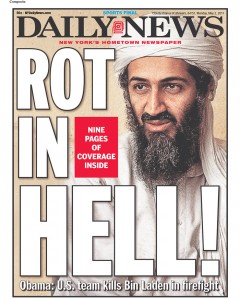 In newsrooms nationwide, they will focus singularly on the story. Features, business and sports reporters will become news reporters. Only extraordinary news will rise to the front pages or the first half-hour of news reports.

Don’t even try to pitch a story this week, and you’d better inform your clients that any news they may have in the coming days will not get any coverage.

Traditional media bloggers are already speculating that the Bin Laden news will save newspapers. “It is an excellent opportunity for the medium,” notes a media blogger from Australia.

Case in point, The Washington Post printed an extra 35,000 copies of Monday’s edition.

On Newseum’s webpage featuring front pages of newspapers around the country, it was clear that today is a day to keep your newspaper, if you still get one. Paul Sparrow, senior vice president at the Newseum, told the Associated Press the site was processing more than 2,800 transactions per second when it crashed.