Did you hear coal giant Peabody Energy is giving away kid-friendly asthma inhalers?

Or that it’s touting a new website called Coal Cares, complete with kids games, an FAQ page that includes famous asthmatics, and a section on why coal is really better than wind power due to the “Chaos Theory” and “Butterfly Effect.”

Yep, even the big boys get spoofed. And in this case, it was a prank done in high fashion. 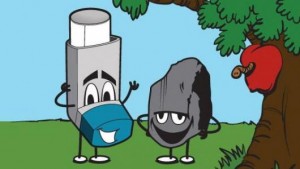 The slick site was touted to the media today with an official looking press release, complete with a “quote” from the Peabody CEO. Some media picked it up, hook line and sinker, with nary a call to check it out.

“Too many young Americans face daily schoolyard taunting and bullying because of a condition over which they have no control,” Gregory H. Boyce, chairman and chief executive officer of Peabody Energy, is quoted as saying in the mock release. “By re-branding the inhaler as a cool, individualized, must-have accessory, Coal Cares will empower children to tell bullies: ‘suck it up.’”

The release directed media to the CoalCares.org site, which is much more than simply a landing page. More than 3,000 people had recommended the fake website on Facebook. On the site, inhalers are offered for free, and they include designs such as Dora the Explorer, Batman, and Justin Bieber. The “Kidz Koal Korner” section on the site features an animated piece of coal and an inhaler.

The site also announced that Peabody would offer $10 coupons toward asthma medication (about 5 percent to 20 percent of the cost) for families living within 200 miles of a coal-fired plant.

Peabody immediately started getting calls from the media, and put out a statement saying: “Earlier today, an activist group released a ‘spoof’ website claiming to be sponsored by Peabody Energy. The site is in fact a hoax, making inaccurate claims about Peabody and coal.”

By the afternoon, another release went out say the The Coal Cares hoax was devised by a group called Coal is Killing Kids (CKK), a small environmental and public health group that worked with the The Yes Men, a group of PR pranksters on a social mission.

“We don’t have their millions, but we do have a knack for incredibly tasteless jokes,” Veronica Tomlinson, a pediatrician and member of CKK, said in a statement.

This blog also appears on PRDaily.com