What’s on Your Plate? 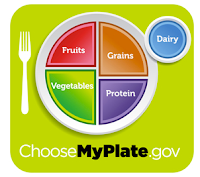 Out goes the food pyramid and in with a new generation icon MyPlate to prompt consumers to think about building a healthy plate at meal times and emphasizes the fruit, vegetable, grains, protein and dairy food groups.

I’ve heard the USDA spent $2 million to create the MyPlate logo and launch the campaign which included an event with the First Lady, a website, blog, video, press release, partnership program, interactive tools, social media outreach and more. The launch has been a huge success. MyPlate has been everywhere. When I scanned my TweetDeck last Thursday and Friday it was like an explosion of chatter from mom groups to foodies to health and wellness organizations. Everyone was talking about the MyPlate and most of the chatter seemed favorable.

And why not? The new visual is simple. One of my favorite broadcast segments covering the new plate was on CBC News. Correspondent Taryn Winter Brill asked kids what they thought of the new plate and got some great answers from “I need to eat more vegetables” to “I know what to put on my plate.” However, it isn’t without its critics. The LA Times ran an opinion piece “My Plate: The Food Pyramid for Dummies” that made me chuckle. “The design illustrating the U.S. Dietary Guidelines seemed so hit-you-over-the-head obvious, I thought they might as well have called the new graphic Eating for Dummies. Clearly, I’m the dummy. While poking around the Web, I’ve come across several frustrated commentators noting that MyPlate doesn’t address nuances (e.g. are potatoes carbs or vegetables?) and leaves too much room for interpretation.” Guess I’m a dummy too.

Businesses have also jumped at the opportunity to capitalize on the new plate. I’d like to send major props to the California Walnuts PR team who put out a press release: Where are the Walnuts on YOUR Plate? just four days after the USDA made the announcement. It is great to see a nimble and forward thinking team pull a release, video, photos, and recipes together that quickly. I’ll be adding walnuts to my grocery list this week.

I look forward to watching this campaign roll out in the coming weeks and how the USDA will measure its success. Thank goodness the food pyramid is gone and I know what foods to put on my plate. What I want to know is when can I get my new place mat?