Another wound for journalistic integrity

Scandal! “News of the World’s last edition Sunday, editor to be arrested!”

It’s a banner headline that the Brits thought they would never read. Fortunately, or unfortunately, it’s all true. 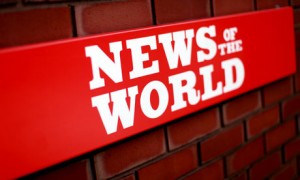 What started as one or two reporters’ egregious actions to hack into private voicemail accounts of celebrities and sports and government figures in an attempt to uncover scoops have blown the newsroom wide open.

On Thursday, the newspaper said in a shocking announcement that its final edition would be on Sunday. This morning comes word that Andy Coulson, the paper’s former editor who had served as communications director for Prime Minister David Cameron, had been arrested and held for questioning in the phone-hacking scandal.

And maybe it doesn’t even stop there.

Now there are questions of whether the scandal spreads to News Corp., parent of the News of the World, and other noteworthy publications such as The Wall Street Journal. The media empire is, of course, run by Rupert Murdoch.

To shut down a publication boasting the highest English language readership in the world is a last-ditch, face-saving move, and it makes you wonder what’s going on behind the scenes.

Clearly, News Corp’s payouts and apologies leading up to Thursday’s announcement weren’t enough. James Murdoch, deputy chief operating officer of News Corp. and son of Rupert, had to apologize again as he announced the shuttering of a paper employing hundreds of journalists, most of whom weren’t at the paper at the time of the scandal or weren’t involved.

“I insist that this organization lives up to the standard of behavior we expect of others. And, finally, I want you all to know that it is critical that the integrity of every journalist who has played fairly is restored,” he said in an announcement.

The world of journalism is going to pay for this for some time. Let’s start with the reporters and editors who worked at the NOTW who, as of Sunday, will be out looking for work. Then there are the less tangible impacts, such as the inevitable question of whether these ruthless reporting tactics are being used elsewhere.

Having worked at a newspaper that shut down—for entirely different reasons—it’s devastating. I can only image what the journalists at the NOTW must feel given the circumstances. In my case, there was nothing wrong with the journalism, just a broken business model.

Had it been the other way around, it would have been hard still believing in the profession. Obviously, there are changes taking place in journalism, the NOTW notwithstanding, it’s evident that some journalistic standards are disappearing.

We maintained a standard in the newsroom: Seek truth, and report it. Now it seems the former may not be as important.