We had a saying in the newsroom: If it weren’t for newspapers, television would have nothing to report on.

That’s still true today when it comes to newspapers and news websites, although I get to see it from an issues-management perspective. 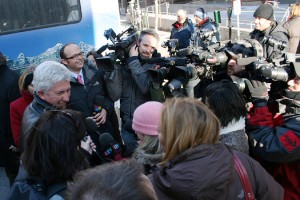 When we have a client who gets profiled in the local newspaper, it usually isn’t long before we get a call from the local television stations. That’s good news for clients in the spotlight for good deeds, but discouraging for ones dealing with unfavorable news.

Television news stories are mostly formulaic, focusing on the human-interest angles, a close second to pet stories. Difficult-to-explain facts, long-form documents, or the intricacies of a particular story rarely get air time. Forget it if there are any legal issues involved.

If newspapers write for readers at a fifth-grade level, television reports cater to the kindergarten set. A three-minute story is not going to spend two minutes explaining both sides of the issue. That’s just the nature of the beast; a 30-minute newscast (including commercial time) has to shoehorn all the day’s news, so in-depth reporting is not a priority.

It’s discouraging from a crisis-communication perspective, but there are some ways to at least get television reporters to attempt to include some comprehensive reporting, or to minimize the negative tones.

Here are some tips to consider when you get a call from a local or national TV reporter looking to do a story that’s unflattering to your client:

1. Prepare your client for the worst. Only on rare occasions is it possible to impact a television report. Remember, TV news programs tend to take a side, and if it is not that of your client, get ready for a shellacking.

2. Think twice about going on camera to respond. Through editing and transitions, proactive comments can be made to look defensive and even embarrassing. There are many cases when it makes sense to provide your side of the story on camera, but think about it strategically first. Do you really stand to alter the tone of the story by going on camera?

3. Provide clear and simple responses to their questions off camera.

4. Offer a short statement. A long statement will be cut in half or paraphrased. Television news typically uses four- to seven-second sound bites. Write your statement accordingly.

5. Get as much information about the story as possible. Whom are they interviewing? What documents do they have, and what’s their angle?

6. If you do go on camera, stick to few focused message points, regardless of the line of questioning, to avoid a damaging sound bite.

7. Consider making a response video, offering your side of the story. Post it on YouTube, repurpose it on social media channels, and tag it so that it shows up on searches for news stories about the topic.

8. Follow up with the reporter as more positive news happens, because you know the other side will be doing the same. At some point, your side might get some air time.

(This blog also appears on PRDaily.com)