Amid tragedy, some thoughts on crisis communications

For a journalist or PR professional, there is nothing more stressful than being on the front lines of a national or international tragedy.

You have to weigh the public’s right to know with the stark reality that some information will invariably further traumatize the victims or jeopardize the investigation. I wish the media and communications professionals working the tragedy in Norway over the next several weeks and months the best of luck, and I hope they will be all too aware of these pitfalls. 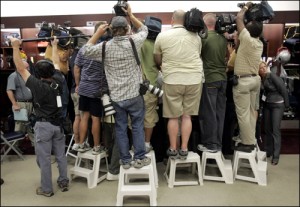 As an editor in charge of reporters covering the 1999 Columbine High School shooting rampage, I was forced to question the media’s role in the days and weeks after the incident. Even the most grizzled reporters came back to the newsroom in tears when parents created a human wall between their children and the media, hurling insults and begging reporters to let their children go back to classes in peace.

On the flip side, Ramonna Robinson worked as a media contact for one of the law enforcement agencies involved in the shooting. Robinson, vice president and managing partner at Denver’s GroundFloor Media, was in a similarly stressful situation.

The public, including parents of victims, wanted to know how this tragedy could happen. In her role, Robinson says that despite the pressure, it was best to let the investigation take its course and present conclusive information rather than only pieces of the puzzle.

Having hosted a professional development conference with her colleagues months after the shootings, she offers the following tips on how to handle such tragedies:

1. Your first priority is to the victims. They should get the information first, whenever possible.
2. Be professional with the media, but don’t be afraid to show emotion. The media can be removed from the tragedy and focused on covering the news. That doesn’t mean you have to be.
3. Work as a team with other law enforcement agencies. Everyone should be providing consistent information at the same time.
4. Zip up the leaks. This will keep media from playing sources off one another.
5. Don’t be afraid to say you don’t know or “that’s confidential” at this time.
6. And provide a briefing schedule and stick to it. Consistency helps build confidence.

The reality is that whether we are messengers from the media side or the PR side, there may never be a sense of closure due to a revelation of facts. The best we can do is to openly and honestly present the facts and not try to explain why it happened—because such situations often defy explanation.