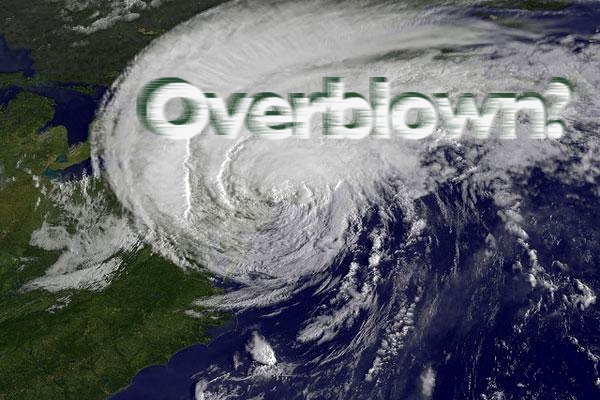 If you felt waterlogged by the media’s coverage of Hurricane Irene, that’s because you were. But it didn’t quite fall into the realm of being “hyped.”

A study of media stories from Aug. 22 to 28 found that hurricane coverage dominated 21 percent of all news. It was a close second to unrest in the Middle East, featuring the historic ouster of Muammar Gaddafi, which filled 26 percent of the news hole, according to the Pew Research Center’s Project for Excellence in Journalism.

If you add the earthquake coverage to the mix, acts of nature made up one-third of all news coverage during the time period. It was even higher if you break out television news, which makes sense given the visual components of a hurricane and quake.

Was the coverage of Hurricane Irene excessive, or was it justified given on the basis of news value?

In a thoughtful review of coverage and analysis of what constitutes “hype,” Julie Moos says no, coverage was fair.

“Hype is the discrepancy between the real value of something and the perceived value of that same thing,” said Moos, director of Poynter’s publications.

Poynter offers some objective criteria for determining whether the news has bled over into the realm of hype:

Given the impacts, and how the storm bumped along the East Coast, flooding communities in the process, coverage matched the news value. Put simply, weather stories are intensely local and affect everyone in a given area. They are hard to hype.