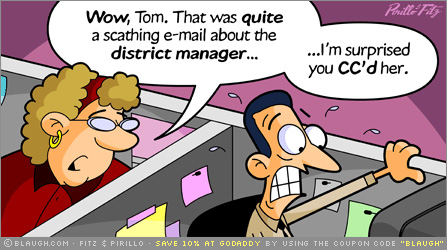 Given the outrageous report detailing the back-and-forth communications of an insensitive PR representative and a sassy blogger last week, it’s time to review some tips on email decorum.

Let’s start with the obvious. Assume that everything you write can be broadcast to the world. Even before blogs and Facebook, this has been the case.

When I was a cub reporter, an elderly homeowner sent me a letter she received from her neighbor, who happened to be an attorney. She was involved in a property dispute with him, and this letter threated the woman with endless legal action that would haunt her every waking (and sleeping) moment.

I persuaded my editor to print the letter as part of a story on the case. The fallout was amazing. The community rallied in support of the elderly homeowner, and the attorney was inundated with hate mail. He apologized and dropped the suit, and undoubtedly lost a ton of business—and sleep.

Nowadays, the homeowner wouldn’t even need to persuade a reporter to do a story; she could just post it to Facebook and let everyone’s outrage do the rest.

Here are some other basic tips that can save you from being the (unflattering) talk of the Internet.

1. “Reply All” pitfalls. Yes, we’ve all done it and have had it done to us. Take an extra 10 seconds before you hit “send,” and make sure it’s going to the intended parties. I once had a prospective client hit “reply all” to an email I sent him outlining my proposal when he intended to respond only to his partner. He said that he wanted to see my upcoming presentation so he could use my ideas himself. Instead of making him aware of the error, I simply canceled the new business presentation.

2. Auto-fill pitfall. Outlook is notorious for auto-filling in the wrong names. Double-check that you are sending to the right person.

3. No poison pen. For whatever reason, nuance is often lost in emails. Something you think is funny can be interpreted as offensive. Unless you are corresponding with someone you can trust, keep emails to the point and devoid of emotion.

4. No downward spiral. With 20 years in a newsroom, I’ve been called every name in the book. Somewhere along the way, I learned to turn the other cheek. Engaging in useless back and forth with someone who has a different viewpoint doesn’t win you any points.

5. Stop, look, and listen. Before you hit send on a nasty email, step away from your computer for 30 minutes. By the time you come back, it’s likely your blood will have stopped boiling, and you’ll delete the missive.

6. Get a buddy. Have a friend or co-worker read your email response before you send it. He or she might offer a clear-headed point of view and may talk some sense into you. Plus, sometimes it just feels better to have someone read your snarky response, even if he’s not the intended recipient.

One final note: After reading the news this week, a colleague reminded our team of the time we asked a state governor to attend a grand opening event. During an email exchange with the governor’s office, one of the aides accidentally cc’d us on the “what the hell do you want me to say to this idiot?” communiqué. We turned that to our advantage, and, as a result, the governor not only attended the event, but also cut the ribbon.