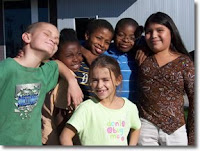 In the weeks leading up to the annual kick-off to the holiday season, Alexis Anderson, Amanda Brannum, Kimmie Greene, Laura Love-Aden and Jennefer Traeger, aka the Colfax Crew, set out to collect personal hygiene products and clothing donations to support the Colfax Community Network (CCN), an organization dedicated to providing information and programs to the children and families residing in low-income and transient housing (primarily residential motels) along Colfax Avenue in Denver.

On Nov. 17, the team filled three cars with donated goods and that was just the beginning.

Once the cars were unloaded, the fun began as the team spent the afternoon volunteering with the kids from the CCN afterschool program. The program strives to create an afternoon of “normalcy” – a break for kids who are likely heading home to unpredictable circumstances.

The kids, ranging in age from 5-11, gathered together to read and share stories about the day before eating homemade snacks and starting homework. Toward the end of our time together, pencils and notebooks were traded in for straw hats and stuffing to build two scarecrows for the CCN garden. The GFM team worked with the kids throughout the afternoon, engaging them about their favorite foods, music and hobbies, as well as helping them with spelling and math.

We felt lucky and proud to spend time with the kids and staff at CCN and urge anyone with two hours to spare to reach out and volunteer their time. The connections are invaluable and remind us in the midst of the mayhem of Black Friday and Cyber Monday about the true meaning of the holidays and giving.

Our involvement with Colfax Community Network is part of the agency’s 10th Anniversary Get Giving campaign. GFM is celebrating 10 years in business by donating a total of $10,000 to four Denver-area nonprofits – $2,500 per organization – Colfax Community Network, Underwearness, Morris Animal Foundation and Dress for Success. In addition to the cash donation, GFM staff divided up into four teams to collect community donations and volunteer time for each organization.