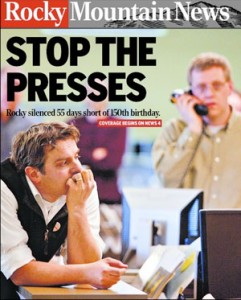 It used to be that the power of the press meant never crossing an industry that buys ink by the 55-gallon drum.

But the newspaper’s ink-stained wretches are fewer and farther between these days, as the predicted recovery for the battle-hardened industry has yet to materialize. Rather, the contrary has happened.

The latest survey shows that the number of newspaper jobs eliminated this year rose by 30 percent from last year.

Moreover, the number of journalism jobs at U.S. newspapers in 2011 sank below 1978 levels, the first year the survey was conducted by the American Society of News Editors (ASNE). Look no further than advertising revenues to see why the industry’s predicted comeback hasn’t materialized.

Newspaper ad sales continued their downward spiral in 2011 and are estimated to decline by 50 percent from 2005 numbers. That led to the 3,775 newsroom job cuts this year, surpassing the 2,920 cuts last year. And these are conservative estimates that don’t include losses through attrition.

The Paper Cuts blog, which tracks U.S. newspaper layoffs and buyouts, put together a map tracking job losses for this year. It looks the same as the maps used in diners, with push-pins in nearly every city in every state.

For the PR world it means more of the same: We have to target pitches better, continually update media lists, pitch only newsworthy events, and continue to focus our outreach on nontraditional media outlets.

Highlights, or lowlights, of the ASNE 2011 survey:

45,000: Number of journalism jobs at U.S. newspapers in 1978, the first year the American Society of News Editors (ASNE) conducted the survey.

41,000: Number of journalism jobs at U.S. newspapers at the end of this year.

3 out of 4: Number of years The New York Times has offered buyouts, and this week its parent company announced it was selling its 16 mid-size newspapers.

Adding insult to injury and exemplifying the slow death of newspapers, ASNE released the numbers via a webinar, as the annual convention has been canceled the last three years because of the dwindling number of registrants.