5 takeaways from the Papa John’s debacle 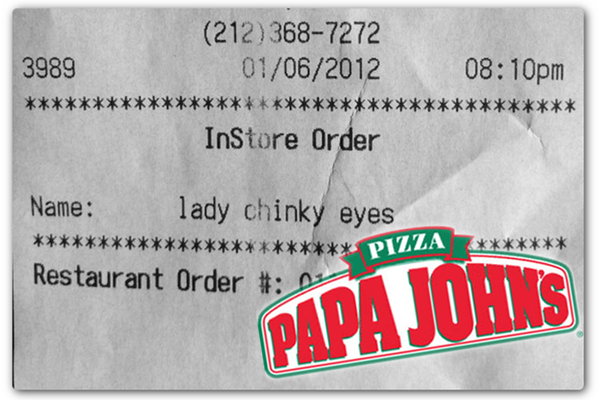 It’s a new year and time to dust off your social media crisis plan. Need motivation? Just check out how Papa John’s is mired in the damage caused this week when a single tweet started a media firestorm.

An unofficial count found nearly 500 news hits covering the Papa John’s story. It began with a 10-word tweet from a customer, accompanied by a twitpic of her Papa John’s receipt that referred to her as “lady chinky eyes.”

The customer is the communications manager for ProPublica, a nonprofit investigative journalism outlet.

Now there are calls for boycotts, and phone lines at this particular upper Manhattan franchise are overloaded with prank calls from people ordering Chinese food.

Papa John’s Twitter account went from ebullient tweets about reaching 2 million Facebook fans and giving away free pizzas to posting hundreds of responses about the incident, saying over and over: “We are very upset by recent receipt issue in New York & sincerely apologize to our customer. Franchise employee involved is being terminated.”

The issue was compounded when an employee was quoted in the media as saying, “I think the lady put it out there just to get some attention—some people like that type of attention. I truly don’t think it’s fair. It’s been taking up all our time. It’s been very disruptive.”

Using this particular incident as a jumping-off point, here are several tips that should be included in any social media crisis plan:

Take immediate action. The speed at which bad news spreads on social media is mind-boggling. Companies need to have a response plan that cuts through the red tape and offers an immediate and appropriate response.

Show sympathy. On social media, an apology goes a long way. No company can manage what every employee does, but it can have policies in place to keep crises from happening. Linking to the policy and getting rid of the employee who breached it are good first steps.

Ensure it won’t reoccur. Learn from the crisis, and put measures in place to minimize the chances of its happening again.

Think bigger picture. A reputation takes a long time to heal, but grand gestures can help. In the case of Papa John’s, maybe a generous donation to a relevant charity might be on point.