Favorites From the Fifth Day in Austin (Monday)

Home > Blog > Favorites From the Fifth Day in Austin (Monday)
Easily our favorite day of SXSW so far, Monday took us from great sessions to amazing food to crazy brand activations to Alexis making a local news appearance to a Jay-Z concert. We had a lot to choose from for our favorites from Monday…here is the list:

Nom nom: Frank is going to get two mentions in in our favorites today, because it’s just that good. As the “Purveyors of Artesian Sausage,” Alexis had the Veggie Jackalope dog (huckleberry compote, sriracha aioli, cheddar) while I had the Texalina (pork and beef sausage, grilled coleslaw, Carolina mustard BBQ sauce, white cheddar), and we both had a corn cup as our side (Grilled corn served off the cob with chili mayonesa, lime juice, cilantro and cotija cheese). We can’t talk enough about how good Frank is. 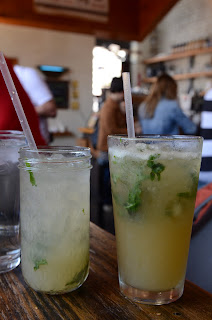 Celebrity-ish Sighting: Walking down 6th Street, post-concert, we ran into actor Matthew Lillard of Scream, Hackers, Scooby Doo, She’s All That and most recently, The Descendants. 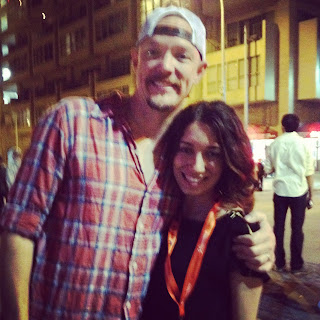 Through the lens: Film director Robert Rodriguez discussing his latest projects in the Samsung Blogger Lounge. 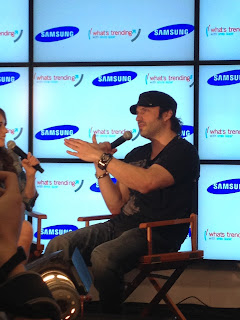 Grab Bag: Walking back to the car before the concert, Alexis and I were stopped by a reporter from the local Fox affiliate to comment on the use of homeless people in Austin to promote free wi-fi hotspots. Alexis made the nightly news in Austin…at this point nothing will surprise us.

Free Stuff Rules: You can’t really top being 15 rows deep on the floor of the ACL Live Moody Theater for a free Jay-Z concert. It was fantastic.

Number of connections made: 66 people and counting. 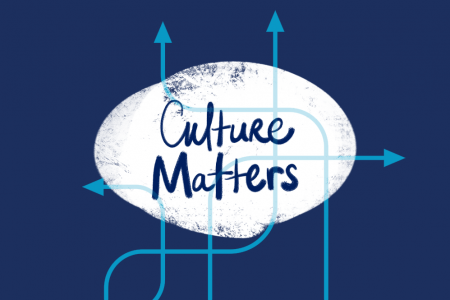