The Speed of Crisis: 9.5 seconds 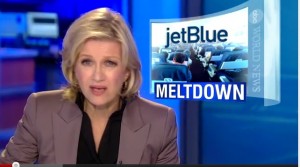 In the era where citizen journalists rule and breaking news is shared in seconds via Twitter, Facebook and YouTube, can reputations be destroyed as quickly? According to the author of the article, not entirely.  Is it because we’re more forgiving today than 10 years ago when “traditional” media could determine who was good and who was bad? Do we have shorter attention spans, where a crisis one day is quickly replaced by the next corporate disaster the following day? Or, is the answer somewhere in between?

Case in point – the recent JetBlue crisis. It had the makings of a perfect storm – a pilot with a “medical situation” and more than 130 passengers/citizen journalists armed with cameras and video capturing every moment while it happened – only to share their experiences on social media even before the plane landed.

The incident could’ve been disastrous for the company, but it wasn’t. Less than 24 hours after the incident, JetBlue’s CEO, Dave Barger, was thrust into the national spotlight having to explain what happened on national TV, radio and in newspapers. It certainly could’ve been an ongoing crisis and seriously damaged Jet Blue’s reputation. But, the company’s response was spot-on, including the CEO’s interview with Matt Lauer on the Today Show. Barger was empathetic, he repeated his key messages (without seeming overly rehearsed), and most importantly, he was sincere and forthcoming.

While I believe we probably are a little more fickle today and ready to move on to the next the next big thing, I also believe the rules of responding to a crisis have not changed, even if the speed at which a crisis occurs has changed.

Here are some basic crisis response guidelines we provide to our clients:

Jet Blue was back in the news again last week when the pilot’s attorney said the pilot will plead he was inane at the time of the mid-air meltdown. Did we pay attention to that news or had we all moved on to the next crisis?