The ethical way to crash a press conference 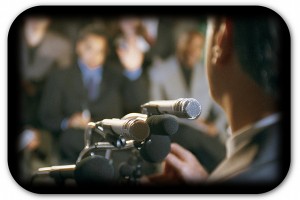 There’s nothing wrong with crashing a press conference or a community meeting, if you do it honestly.

If you are asked by the organizers who you are, you should be open, honest, and clear about your intentions. This ethics rule about honestly representing who you are covers journalists and PR professionals.

Apparently, this rule was broken by a public affairs firm employee who misidentified herself to gain access to a labor group that opposes a proposed Walmart store planned in L.A.’s Chinatown. The firm fired her, and Walmart, in turn, fired the firm.

I’ve attended numerous events without a formal invitation, and I have never been kicked out even after I have identified myself and the organization I represented. Nearly all the time, they respect that someone from the “other side” is there to listen.

On most occasions, I’ve been pulled aside and asked to be respectful. I also was told that if I wanted to speak to reporters or participants, I should do so outside, so as not to disrupt the event. At one press conference, they gave me a seat up front even though I represented the other side.

It comes down to credibility. The Society of Professional Journalists’ Code of Ethics handbook says reporters should “avoid undercover or other surreptitious methods of gathering information except when traditional open methods will not yield information vital to the public.”

In 1995, a Wall Street Journal reporter won the Pulitzer Prize for exposing dehumanizing and dangerous work at a chicken-processing plant. On his application for employment at the plant, he listed Columbia University as his education and Dow Jones & Co., the publisher of the Journal, as his current employer. The story was held up as the standard of honest reporting.

On the flip side, ABC’s “PrimeTime Live” was dragged into court for fraud after its reporters lied about their work experience to gain “hidden camera” access into a supermarket chain to try to expose labor law and unsanitary food violations. ABC ultimately prevailed in the case, but not after a long legal battle.

In the world of PR, I can’t see any instance in which lying about who you are would be vital to the public. It may be vital or important to your client, but that’s not good enough. In the Walmart incident, this misrepresentation clearly was not in the public’s interest, and the damage it caused far outweighs the benefits.