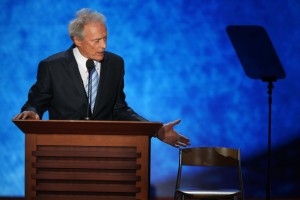 In what was being billed as the biggest moment of his political career, GOP candidate Mitt Romney offered his best as a caring, presidential person and predictably hit all the right notes in his acceptance speech Thursday night.

But the biggest surprise of the night was Clint Eastwood’s completely befuddling, funny, and painful stage act previewing Romney’s speech. Even CNN’s Anderson Cooper couldn’t stop talking about it in the post speech discussion.

The Twitter-sphere went off the hook, with thousands of updates each minute and a new viral meme #eastwooding, in which people shared pictures of themselves pointing to an empty chair. In the 30 minutes after the speech, a new Twitter account called @InvisibleObama landed 50,000 followers. The Romney campaign sent out a release to diffuse the issue saying it was not an official speech, but rather a break from them.