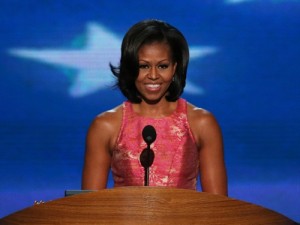 The kickoff of the Democratic National Convention on Tuesday night was less of a get-to-know-you party like the GOP’s event last week, and more of an adrenaline shot to keep Democrats excited about the four-year-long party and about President Obama.

The steady stream of speakers—from Maryland Gov. Martin O’Malley and Illinois Gov. Pat Quinn to Chicago Mayor Rahm Emanuel and actor Kal Penn of “Harold and Kumar” fame— kept with the mantra “Forward, Not Back,” prompting this tweet: “OK. If you are playing the #DNC2012 Drinking Game, please take ‘Forward’ off the list, or make sure you have a doctor in the house.”

The featured speaker First Lady Michelle Obama offered a strong speech that avoided the word Romney and only said “Republican” once, while focusing on the man behind the president. He was a “guy whose proudest possession was a coffee table he’d found in a dumpster.” And she added, “we were so young, so in love, and so in debt.” A more memorable sound bite was: “I have seen firsthand that being president doesn’t change who you are—it reveals who you are.”