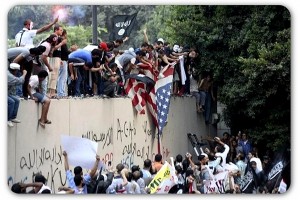 The interminable power of words, particularly when they are about foreign affairs in the Middle East, once again became evident this week.

Middle Eastern countries were already on edge about an anti-Muslim video, when pundits and politicos decided to aggravate growing tensions with statements even as embassies in Egypt, Yemen, and Tunisia have been attacked by mobs.

The culmination of the week’s international crisis was the unfortunate death of four Americans, including U.S. Ambassador to Libya Christopher Stevens.

The roundup below should serve as a lesson that reacting to foreign affairs issues is not the same as, say, domestic economic issues. It’s also a reminder that despite our political differences there should be a commitment by political parties to stand together when a good portion of the world is upset with us.