Learning from the Presidential Debate: Can You Recover from a Bad TV Appearance?

Home > Blog > Crisis Communication > Learning from the Presidential Debate: Can You Recover from a Bad TV Appearance?

If you live in the D 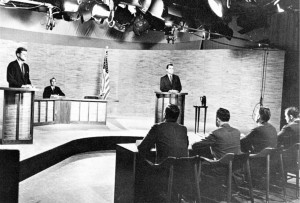 enver metro area, you may already be a little tired of hearing about the first Presidential debate set for Wednesday, Oct. 3. The road closures, the headaches, and the non-stop political ads. At least the first two will be done after tonight.

“CBS Sunday Morning” ran an interesting story this past weekend called Let the debates begin. It examined the history of presidential debates, going back 52 years to the first televised debate between Richard Nixon and John F. Kennedy in 1960. What has been well documented by historians about the debate is that it led Nixon’s downfall in the 1960 election (sweating is bad when you’re on TV and running for president); your appearance does matter.

The segment went on to cover the best sound bites delivered by presidents and candidates during these debates, frequently used by PR professionals during media training as examples of how to deliver your message in a short, pithy sound bite.

President Obama and Governor Romney certainly understand the power of this televised debate. From what the news is reporting, this will be the most rehearsed debate ever. And those memorable sound bites, you can bet both candidates have their fair share locked, loaded and ready to use, knowing how their powerful words will be rebroadcast and shared virally.

And even their facial expressions and movements are extremely important because of the proliferation of animated GIFs and how they are being used to help cover the debate.

After watching the CBS segment, I questioned whether a bad TV appearance could really lead to someone’s downfall. As a PR professional, I understand the power of TV, both good and bad. And in an era where everything that appears on TV can be shared across the globe through social media channels in mere seconds, can one negative TV story be that detrimental? The same can be said for video that first appears on social media channels and is then rebroadcast on TV (think about Governor Romney’s video on the 47 percent of Americans who don’t pay federal income taxes). What can be done to mitigate the damage of a devastating TV appearance or negative coverage about your company or organization that is being rebroadcast around the world?

The short answer is that you can’t make the negative story disappear. What you can do is ensure that it doesn’t happen again and communicate your story directly with your target audiences.

Following are some tips to be learned from presidential debaters on preparing for TV or a public appearance:

• Know your key messages and how to deliver them in short, memorable sentences

• Understand your audience – who are you trying to reach and what matters to them?

• While practice is critical, makes sure that you don’t sound too scripted – listen and then answer the question