The Irony of It All: Does USA Today Take the Cake?

Home > Blog > In the News > The Irony of It All: Does USA Today Take the Cake? 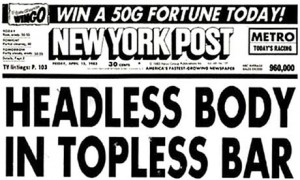 As I was reading my complimentary hotel copy of USA Today on my return flight from Austin to Denver, I was struck by several stories that made we wonder about story choices by the nation’s largest circulation newspaper.

First, on the front page at the top of the paper, was an article about how Miami County, Ohio has seen one of the highest increases in poverty in the U.S. in the past four years, with 16 percent of it residents living below the poverty line. Second, right below that story was an article on the $450 Starbucks gift card. In case you haven’t heard about it, the card is made of steel and is loaded with $400. The price difference is because it costs $50 to make each one of the 5,000 gift cards that will surely sell out. The card will buy you 57 of the $7.00 limited brew coffees that Starbucks recently rolled out.

While the front page of the paper made me stop and think – especially during the hustle and bustle of the holiday season as many people are rushing around buying gifts, while others, like those mentioned in the Miami County, Ohio story, are just trying to survive – nothing prepared me for story and photo on the next page.

Over the past two days, the media has widely covered the tragic story of the man who was killed by the New York subway train. The public has reacted loudly to this story and to the controversy surrounding the photographer who took the photo of the man on the track right before he was killed.

USA Today ran a story showing the previous day’s New York Post cover, which included the photo of the man trying to climb up from the track. “NY Post cover stirs debate: Photo blasted as insensitive and sensationalist” screamed the USA Today headline. Seriously. Is it okay for USA Today to reprint this horrific photo because it was reporting about the outcry to the New York Post story? A little like the pot calling the kettle black? To make its point about how the New York Post is known for pushing the envelope and sleazy journalism, the article went on to cover other infamous headlines by the paper including one of it most famous: Headless Body Found in Topless Bar.

As the nation’s largest newspaper with more than 3 million daily readers, what is USA Today’s responsibility and moral obligation with reprinting this photo? Did the editors think it was okay since the New York Post had done it first and it was merely reporting on the controversy? What do you think?