The Year in Social Media Crises – What We’ve Learned

As social media continued to weave its way into the day-to-day life of more and more of the population, there were no shortages of social media issues or crises in 2012. But rather than share a “Don’t Do This” advice column, we’ve compiled this brief list of things we’ve learned, or been regularly reminded of, in 2012.

1) Social media posts are (still) not made in a vacuum.

In what is probably the five-billionth time this has been said – everything you post on social networks is discoverable. That includes opinions, cheap shots, drive-by comments and even the tongue-in-cheek responses that will most likely be taken the wrong way by someone. Just as you try not to say the first thing that pops into your mind in front of your boss, your mother, or your children…pause before you post. Do you really want everyone in the world to read that post? And if they do, how will they react?

Related 2012 learning: We saw this dozens of times in 2012 – when you manage a social media profile for a business, check, double-check, and triple-check that your personal posts aren’t going up on the business profile (see “Montana Tourism” below). 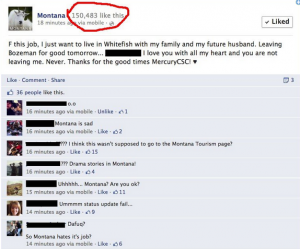 2) There’s a fine, yet distinct line between “outreach” and “spam”

Some people get it, most don’t. Reach out to people or other organizations. Talk to them, not at them. If you’re planning to automate your social media posts or responses in 2013, you should probably reconsider.

Even if your auto-posts or your SEO-charged blog comments aren’t timed as poorly as the posts listed above, if you’re not genuine, it’s still apparent. Do your homework before interacting with people on social networks for marketing purposes, and by all means, show compassion if you are facing a crisis situation.

4) In a crisis, social media can give businesses a voice of their own

We talk a lot about crises playing out on social networks, but don’t forget that when used correctly, social media platforms can help businesses tell the other side of the story.

This is somewhat of a recap of all the reminders above, but when you post, what you say, how you say it, and how quick you are to respond all have a distinct impact on the fallout from any number of social media situations. A response, sooner rather than later, can mean the difference between a customer who feels cared for, and a social media debacle.