21 Top Editors Leaving NY Times,
What Does It Mean For Journalism? 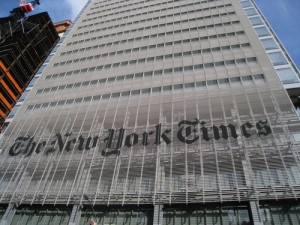 The following is an excerpt from an article written by GroundFloor Media’s Gil Rudawsky for Ragan’s PR Daily:

The world caught a glimpse of the future of print journalism in December with The New York Times’ publication of “Snow Fall,” a story about an avalanche that unifies text and multimedia to dramatic effect.

With “Snow Fall,” the staff at the Grey Lady showed its readers that good storytelling doesn’t have to be just columns of text, and this new hybrid multimedia approach can attract millions of readers. But, as the Times attempts to rewrite the future of newspapering, they still can’t shake the old world problems of not enough readers or advertisers.

To stay viable, the paper kicked off the new year by offering buyouts to its team of top editors. This week it was reported that 21 top editors accepted the offer, including Sports Editor Joe Sexton, who oversaw the production of “Snow Fall.”

In a candid interview with New York magazine, Sexton said that the Times’ culture lacks radical thinking needed to survive in the changing media environment.