Sunday is the day people typically start to become a little punchy at South By, but the past couple of years its also been the day when the sun comes out and the weather brightens everyone up a bit. Here are our favorites from Sunday: 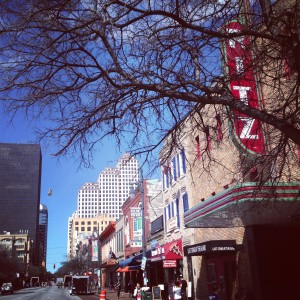 Nom nom: We had an amazing dinner at Lambert’s Downtown Barbeque with our friends from 34 Degrees, complete with ribs, brisket, ribeye, roasted Brussels sprouts and grits. Reservations are recommended, as is the coconut cream pie.

Libations: The margarita’s at La Condesa were one of the best decisions of the week. They even included flavored salt!

Celebrity-ish Sighting: We missed the cast of Arrested Development, but we did run into Huffington Post correspondent Conquistador. He even joined us at Lambert’s.

Through the lens: We’re big Game of Thrones fans at GFM so of course Jon geeked out when he was able to sit on the throne.

Grab Bag: Jon and I both purchased Mophie juice packs in advance of the festival to keep our mobile devices charged. Jon has the Mophie Juice Pack Helium case charger and I have the Juice Pack Powerstation. Both work fantastically to replenish your charge on the go, and both are invaluable when there are no outlets to be found.

Free Stuff Rules: The Samsung Blogger Lounge once again knocked it out of the park at SXSW. Networking opportunities, tons of plugs to recharge your devices, live interviews with celebrities, daily happy hours and seemingly endless caffeinated beverages. Samsung knows its SXSWi audience.

Overheard: “The ridiculous thing is, they’re hiring copyrighters.” ~ an angry programming-type attendee walking down 2nd street, proving that the struggle between development and creative is alive and well.

Number of connections made: 76 and counting.