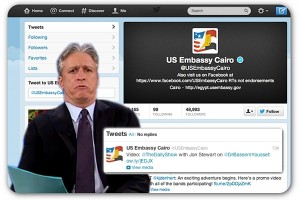 GroundFloor Media’s Gil Rudawsky was quoted in Ragan’s PR Daily about State Department’s Twitter blunder when the Embassy Cairo tweeted a link to a “Daily Show” segment about an Egyptian TV personality—billed as that nation’s Jon Stewart—who had been arrested for criticizing President Mohamed Morsi.

“This issue should be a wake-up call for other State Department officials using Twitter to institute a social media policy about what is appropriate, and what is not,” he said. “If they have one, it’s time to review it.”

According to Rudawsky, who is a frequent contributor to PR Daily, the State Department, particularly those working in the Middle East, need to approach Twitter with the same oversight as traditional communications.

“I highly doubt that they would have sent out a release teasing to a ‘The Daily Show’ [segment] critical of the Egyptian president,” he explained. “Satire isn’t appropriate in press releases, and, likewise, it is not appropriate in official Twitter accounts.”