There are social media crises, and then there are “what on Earth are they thinking” scenarios. What we’ve seen play out with Amy’s Baking Company is clearly the latter. If you’re unfamiliar, one of the latest (and almost unfathomable) social media flubs played out this way: 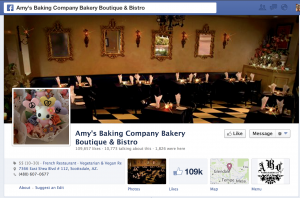 It doesn’t take a social media expert to understand the numerous reasons that type of response is a bad idea. Forbes Magazine posted an intelligent article outlining “six things you should never do on social media” based on the Amy’s Bakery debacle. One of the common themes in that article is advice we frequently provide our clients at GFM: There is a fine, yet distinct line between responding and not responding.

Growing a thick skin and letting Internet trolls/negative posts go is sometimes easier said than done. But what about those complaints/posts/claims that warrant a response? How do you properly prepare for those “worst case” scenarios beyond the day-to-day negative comments and complaints your business has grown accustomed to?

In the social media world of real-time satisfaction, drive-by insults and bandwagon story trends, brands need to understand that the first time they handle a negative social media scenario shouldn’t be “live” and in front of the entire world. Take the time to identify the top 4-6 scenarios that might keep you up at night, or present the most risk to your brand and then practice responses and put processes in place so that your “dry run” doesn’t show up on the front page of Mashable.

At GFM we frequently do this with our Online War Room™ social media crisis simulator. And every time we receive the same response from our clients who have gone through the experience: “we had a pretty good idea of how we’d respond, but it’s not the same as actually going through the scenario in real time.”

Hopefully we all have the good sense to not take a page from Amy’s Bakery when we engage with online communities. And I would propose taking it a step further than relying on conventional common sense – practice, plan, and don’t let your first uncomfortable online conversation play out in front of the general public.

Jim Licko is a Senior Director of Social Media and Digital Strategy at GroundFloor Media, and while he avoids personally complaining about brands on social networks, he probably enjoys creating negative scenarios via GFM’s Online War Room a little too much.