Is Your Crisis Communication Plan Ready for Prime Time? 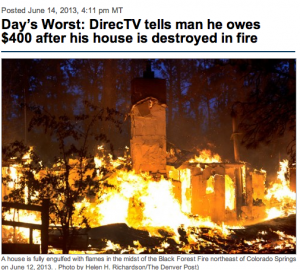 I was reading about the recent backlash against DirectTV when a man called to cancel his service after his house burned to the ground in the recent Colorado fires. He was told by the customer service person that he would still have to pay the $400 for the satellite dish and two receivers that were destroyed in the fire. Ouch.

After The Gazette covered the story, the fallout was immediate and fierce with people taking to Facebook and other social media platforms to vent against the company. Other media outlets also picked up and reported the story. DirecTV responded by saying that the company does have a disaster policy for customers and that “the agent who spoke to the customer gave the wrong information. We are here to help all of customers and do apologize for the miscommunication.”

The most comprehensive crisis communication plan will fall flat if everyone in the company, especially front-line employees who interact with the customers, aren’t properly trained.

As part of the crisis planning process, training key employees can’t be an afterthought, but an integral part of the plan.

• Have draft messages prepared in advance for anticipated crisis scenarios

The Colorado fires were not a crisis for DirecTV, but what occurred after the customer’s story went public became a black eye against the company and put DirecTV into crisis response mode because its employee didn’t have the proper training and support. This happens time and time again with companies across the country. Hopefully everyone can learn from this important lesson and will re-examine customer service training and protocols.