Twitter may no longer be the new, bright and shiny social media platform, but for many brands it is still a daunting platform to maintain. Twitter intimidation can quickly lead to a one-way stream of information instead of taking the time to hone the delicate balance and skill of Twitter conversation—the lifeblood of success in the space.

Imagine you are at a cocktail party, stuck in the corner talking to someone who only talks about themselves. You’d be looking for every moment to escape and would warn others to do the same. This analogy may be a bit extreme but it’s one of my favorites for demonstrating the importance of conversing on Twitter in order to capture followers’ attention in mere seconds.

But I get it. Conversing with strangers throughout the day is no small task. It requires a distinct monitoring and response strategy and most importantly, time. If Twitter makes your head spin ask yourself the following questions: 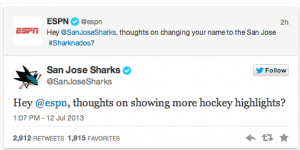 Finally, watch and learn from the best—both in your industry and from brands you love personally. Some of my current favorites include @Breckenridgemtn, @Chobani and for my colleague @WoodrowWilson (the biggest sports fan I know), the @LAKings. You never know what tweet will inspire a whole new way of thinking about Twitter for your own social media program.

~Alexis Anderson is an avid follower of savvy brands and communities on Twitter. One of her current Twitter crushes is on @FitFluential.