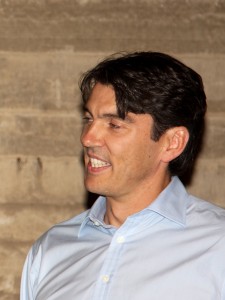 Laying off employees is never a good situation for an executive, but the situation can be made even worse if you lose your cool and it is caught on tape.

That’s exactly what happened last week when AOL CEO Tim Armstrong announced sweeping layoffs across the company’s money-losing Patch network. During the announcement, which was live for people in AOL’s headquarters and via conference call for everyone else, Patch Creative Director Abel Lenz started to take a picture.

Armstrong, according to numerous reports, stopped his announcement and said: “Abel, put that camera down right now! Abel, you’re fired. Out!” After a brief pause, Armstrong launched right back in to his statement.

To further corroborate the witness accounts of the outburst, someone who was taping the announcement sent the audio recording to journalism blogger Jim Romenesko, who uploaded it to Soundcloud. The firing comes across at about 2 minutes into the uploaded recording, preserving the exchange for everyone to hear.

By Monday afternoon, the audio has been listened to nearly 500,000 times, and it was covered by most major news outlets: here, here and here.

The crisis communication lesson here is that everything you say, write or do can be available for public consumption. For Armstrong’s part, he should have been well aware of the potential for leaks, since he reportedly said on the call that leaks were making Patch seem like “loser-ville” in the press.