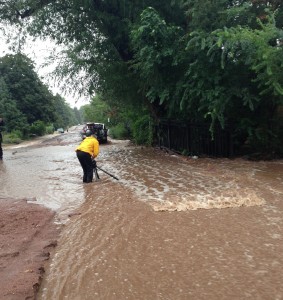 As my community was deluged with five straight days of incessant rain, I became the consumer of crisis communications rather than the provider.

With the tables turned, I relied on my government, businesses, and neighborhood groups to provide key information, such as: Is my water safe to drink? When will my power be back on? Can I flush the toilet? And who has a wet-dry vac I can borrow?

The rain fell in Boulder for a week straight. There were degrees of rainfall, from torrential to just simply rain, but not once did it cease.

The result was devastating as huge torrents of water flowed off the foothills and into our neighborhoods. Streets were turned into rivers that carried away everything in their way—including cars, trees, and homes. The lucky neighbors were those ones only flooded basements. The ones who got it worse saw their homes twisted by the water or completely flooded and washed away.

It’s being called the 100-year flood, with more rainfall in one week than we typically get in two years. FEMA descended on our town over the weekend and mobilized the largest airlift since Hurricane Katrina in 2005.

The best and the worst

During the storm, I found the best source of information—in terms of photos, videos, and status updates—to be Facebook.

Curiously, I also found Facebook to be the single worst source of vital information; it was full of unsubstantiated rumors. One highly discouraging post purported that Boulder’s water was unsafe to drink, based on a conversation someone overheard between law enforcement officials.

It spread across my Facebook feeds, and soon there were runs on bottled water at grocery stores. A quick check with the Colorado Department of Public Health’s special flood landing page confirmed that the water was safe to drink. I posted it, but the rumor persisted.

The local media did a heroic job of covering this disaster, but it was difficult to find a report that offered all the crucial information in one story. Regular news briefings by local government, university, and utility officials were extremely helpful, offering an unfiltered account of the latest developments. As the flooding worsened, they were joined by officials from the National Guard, FEMA, and the State of Colorado.

The Twitter feed by the city’s Office of Emergency Management has served as the go-to source. It effectively has refuted bogus rumors and has offered the most up-to-date information on flooding and evacuations. It posted about 500 tweets and important retweets from other agencies starting when the first flash-flood warning was issued on Sept. 11.

The updates from my community was crucial. They included:

• The National Weather Service sent texts warning of flash floods in our community.

• Our bank sent an email to all customers in the area informing them that all late fees would be waived, and saying it would rush new bank cards to customers in need.

• The school district sent regular updates, detailing damages to schools, closings, and counseling resources to help students cope with the emotional impact of the disaster.

• Our synagogue sent an update on the condition of the building and the status of high-holiday services, and it created a clearinghouse for those in need of help and those offering help.

• Our neighborhood group on Yahoo served as a medium for everyone to check in and ask for or offer help.

Having experienced how important communication is for clients during a crisis, and now being part of one, I’m more convinced that having lines of communication open—from the macro government agency to the micro neighborhood group—can help during an otherwise devastating event.