“Bark Twice if You’re in Milwaukee!”

What does this quote have to do with marketing messages?  Well, nothing, but attention-grabbing silliness can improve visibility.

Innovation in communication, story telling and some just plain out-of-the-box thinking resulted in some great visibility and exposure for established companies this holiday season.

Consumers so sick and tired of cliché ‘year-end-sales’ messaging in the auto industry were shocked into paying attention to the new Dodge SUV campaign released in the fall of 2013. Delivering the attention grabbing missives was none other than the fictional Ron Burgundy, actor Will Ferrell’s lead character of Anchorman and the upcoming Anchorman 2 film release.

Irreverent humor as well as an association with an upcoming blockbuster film got attention. Not considered an automotive authority or even to be an honest spokesperson for anything, the Ron Burgundy character not only got the attention Dodge was seeking, but apparently motivated prospective buyers to visit dealerships in significant numbers.

Advertising Age reported that the Ron Burgundy campaign drove a 36% increase in SUV sales for Dodge in November of 2013 as compared to the same month the previous year. Website traffic was also reported to have increased by 80%.  These are solid increases that have marketers paying attention. 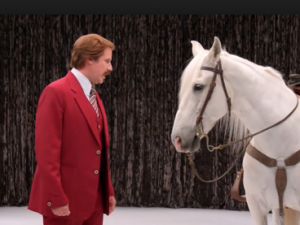 Using a fictional character to sell a product isn’t new. Cartoon characters have hawked breakfast cereals for generations. What makes the Burgundy campaign interesting is the entertainment value that makes the message worth consuming. Whether on television or social media, comparing an SUV to a horse when discussing engine power is a creative way to present a significant product attribute.

Ron Burgundy has been made valuable as a spokesperson for other reasons as well. Burgundy’s (Will Ferrell’s) appearance in full character on local news programs is unique, and creative and leaves viewers wondering what will happen next. Interviews with well-known sports stars such as the Broncos’ Peyton Manning keep viewers attentive to the content. Tapping into this stream of attention can produce the kind of results Dodge has enjoyed.

Connecting an established product line to the excitement and ‘buzz’ around an upcoming popular event, such as a film release, or fictional character can generate attention. Will that attention be the kind of positive interaction that the company seeks? There is always an element of risk to these types of decisions, but the risk of investing in another common, yet expensive communication campaign is also significant.

In the end, it might be worth taking a bit more risk in reaching out to prospective buyers. After all, how many automobile ads showing a big red bow on top of a car can one consumer stand?