What does a Football Championship game have to do with extending social media reach? With a little creativity, the attention any major event generates may be used to build visibility or increase cause awareness.

The recently concluded national college football championship generated a great deal of national attention. Although Florida State emerged as the 34-31 winner in the BCS National Championship of College Football, there were other accomplishments resulting from the event that both schools can celebrate. 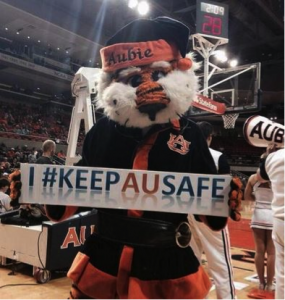 Football fans are usually loyal, active and tend to consume a great deal of information about their favorite teams. This attention and willingness to engage provided a couple of creative communications managers an opportunity to solve a difficult problem. The challenge: build a social media network that would deliver official information and provide guidance in the event of a campus emergency. Giving  students and staff a reason to opt-in to the network(s) was particularly challenging.

During the run-up to the college championship game, enterprising social media managers at Florida State and Auburn launched a campaign to promote safety and awareness on campus. One of the main objectives to the campaign was to extend the reach of existing social communication channels that would be needed in the event of a safety issue or emergency on both campuses.

By promoting a little friendly competition between Auburn and Florida State to see which could actively engage more participants, each school used the pre-game attention to increase Facebook likes, Twitter followers and overall engagement levels for their emergency social media properties. Students were encouraged to comment and post creative photos highlighting safety messages. Competing with the opposing school to see which institution was more active led to some creative, user-submitted photos and content and drove further engagement. Each school tracked daily results for a three week period.

According to a recent FEMA article, results were outstanding. Auburn University reported over 2,000 ‘likes’ to its Public Safety and Emergency Management Facebook page within a period of three weeks. Both schools reported total views across all social media platforms of 2.7 million. This friendly competition for a fairly serious -if normally uninteresting- topic is a significant achievement.

Social media connects government, private organizations and individuals during emergency situations. The improved reach of each school’s social media properties is important to managing future emergencies. The forward thinking risk managers at each school took advantage of a current event to extend social media reach and build the communications channels they hope they never need.