For Broncos fans (like most of us here at GFM), yesterday’s game was a debacle. That is really all there is to say. Since it was too painful to watch I did not mind that I was multitasking throughout the afternoon with a baby who wanted to play and parents visiting for just a few hours from California. After an airport run I never made it back downstairs to watch the TV. Instead, I settled in for playtime with our son and Twitter on my phone.

Hashtag #SB48 was THE way to stay connected to the game once you could bear to watch. Read on for some of my favorite social media stories from Sunday. 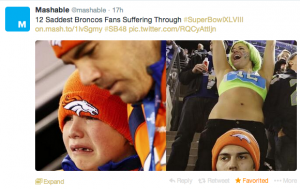 Tweet translation: Must watch Chobani commercial and get more educated on GMOs 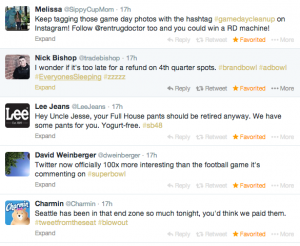 Tweet translations: Brands are obsessed with trying to disrupt the conversation and strike cold with one witty tweet that goes viral. Brand who advertised in the fourth quarter probably wanted their money back. Twitter is king during major televised events.

And of course, today’s PR and social media industry roundups of the #adbowl winners and losers are everywhere. Having missed all the big commercials, Twitter has led me to believe that Radio Shack, Microsoft and Doritos were big winners. I saw TurboTax get pummeled in real-time during the first quarter for not being relevant but I must admit, the prom comparison got a laugh out of me.

We want to hear from you! Did you watch the Super Bowl or #SB48 last night?

Alexis Anderson is a multitasking new mom who balanced a baby on her hip while tweeting during the disaster that was #SB48 for Broncos Fans (though her allegiance is to the San Diego Chargers).