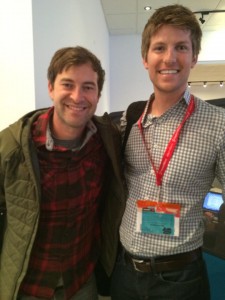 Sunday essentially filled itself out, without effort. TV actors, Bieber, brunch, pink overalls and bags of food being thrown at us. That sounds about right for SXSWi.

Celebrity-ish Sighting: Being the Commissioner of his own fantasy football league, Jon was more than excited to run into Mark Duplass from The League at the Samsung Blogger Lounge.

Grab Bag: If you’re at an event as big as South By and you see a small guy walking swiftly with a big guy behind him flashing lights in people’s eyes, apparently its likely a celebrity. We were passed by Justin Bieber and Selena Gomez while walking on Rainey Street. 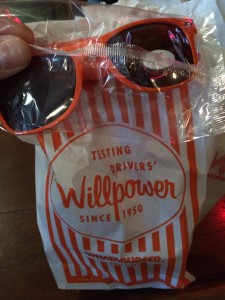 Free Stuff Rules: When you leave the hotel in the morning and a bus rolls by with people throwing Whataburger breakfast tacos and sunglasses at you, you know its going to be a good day.

Overheard: “This is the most unflattering outfit I’ve ever worn.” – A random street team member in pink Dickies overalls.

Through the Lens: Rainey Street looking back at downtown Austin: 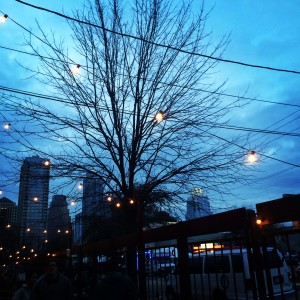 Listen to our discussion on corporate social responsibility with winners of the Civic 50 award, which recognizes Colorado’s most community-minded companies.