Censorship and Transparency in the Internet Age 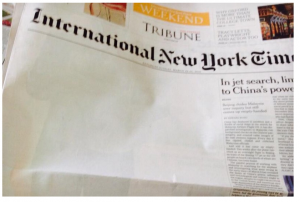 We conduct a lot of crisis communication work for clients at GFM, and two of our top pieces of advice always involve “honesty” and “transparency.” I’m always amazed when organizations think that they can fool their audiences in a world that includes the Internet, word of mouth and social media. Therefore, two recent news stories took the term “crisis communication” to a whole new level for me…

1) An image and article about Pakistan’s ties to Osama Bin Laden were removed from the International New York Times in Pakistan on Sunday. Completely removed, only to leave blank space on the front page. Ironically, I can’t imagine anything that would get people talking more about something than to have so obviously attempted to censor it.

2) Last week, in the run-up to a heated political election and frustrated by social media discussions about corruption in his administration, Turkey’s prime minister blocked Twitter. Some Turks quickly found work-arounds that allowed them to text in a tweet, but the official ban continues.

In an age of information overload, it is amazing to me that there are still places on earth that try to censor their citizens’ access to negative or embarrassing news and information. So much for honesty and transparency! This reminds me to be appreciative of the news in the U.S. – even if we don’t always agree on how it is reported, at least we still have access to it and can make our own judgments.