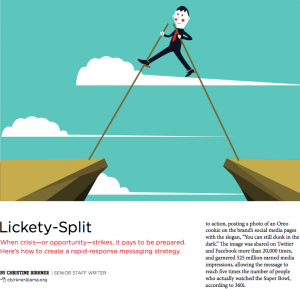 The lines between public relations and marketing continue to blur as Marketing News, the monthly publication for the American Marketing Association, recently focused on creating rapid-response messaging for a crisis or opportunity.

The article, titled Lickety-Split, covered the example of Oreo and how its parent company and marketing agency quickly capitalized on the 2013 Super Bowl blackout by posting a photo of the cookie on the brand’s social media pages with the slogan, “You can still dunk in the dark.” The image was shared thousands of times on Facebook and Twitter and generated millions of earned media impressions. The author, with help from Gil Rudawsky, provides five tips for developing and executing rapid-response messaging.

Develop a brand voice. Oreo had been building a brand voice for years through various campaigns on social media, so when the Super Bowl opportunity presented itself, the team had the pieces in place to respond quickly (and Oreo was a Super Bowl advertiser).

Get buy-in promptly. “Getting approval from the C-suite and legal team in a timely matter is a crucial part of every rapid-response plan, particularly in the event of a crisis,” said Rudawsky. “Get your executives and legal team in a room, and show them case studies from other brands of how quickly things move, so when you respond online, the process is streamlined and you won’t need to wait for legal to respond to a tweet you want to post right away.”

Draft the best players. It’s critical to have a plan and a dedicated crisis team in place, which includes legal, before a crisis hits. A detailed crisis plan that the crisis team knows inside and out, can mean the difference between containing a crisis and having the crisis control you.

Stay on call. “Monitor your brand’s social media channels around the clock,” Rudawsky says. “If something happens online, or on Twitter or a Facebook page, and you immediately respond, you can sometimes diffuse the situation before it blows up. Social media disasters rarely happen between 8 and 5. They happen at 2 a.m. You have to monitor 24 hours a day. You can’t wait until 8 a.m. to respond.”

Be flexible. “For Oreo, even though they probably had an outline of the all the tweets and posts they were going to do during the game, it was brilliant when someone thought the blackout was a good opportunity to have fun with the situation,” said Rudawsky. “You have to have nimbleness and that the trust in your communications team to respond quickly.”