The Late-Night Changing of the Guard Continues 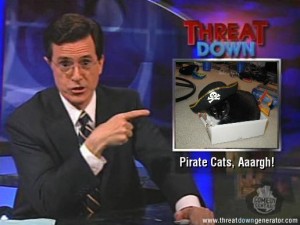 I’ve never been much of a late-night show fan. I have been to a “Tonight Show” with Jay Leno taping and caught a few monologues here and there, but overall the Leno versus Letterman competition was always lost on me.

However, everything changed in our household when Jimmy Fallon took over the “Tonight Show.” Thanks to Apple TV and our Hulu Plus subscription, my husband and I can be found doubled over laughing when we catch up on Fallon over the weekend. As part of what NBC would consider its “younger” audience, Fallon is relevant and has hit countless homeruns on social media. The evolution of hip-hop dancing with Will Smith? Keep it coming! So it wasn’t a surprise to me that CBS and Letterman announced a similar “changing of the late-night guard” for 2015.  But is Stephen Colbert the right choice?

Google the announcement and the Internet is on fire with support and dismay for the decision. The New York Post calls it a screw up while USA Today is excited about the choice.

As someone who is equally enthralled by traditional and new media, I am torn on Colbert’s move to network television. He makes me laugh, but it will be interesting to watch how much he continues to blur the lines between traditional media and comedic “reporting” in primetime.

A 2012 visit to the Newseum made me appreciate the unique space Comedy Central has carved out for fake/comedic news, and I think it is a disappointment to lose “The Colbert Report.” And then there is Colbert’s style of sarcasm. Social media, as a medium, is quick to judge and can blow a seemingly benign comment into a firestorm when taken out of context. The CBS crisis communications and social media teams better use the upcoming transition months to prepare, because Colbert will undoubtedly ruffle feathers.

Are network viewers ready for Colbert? Will CBS reign him in to the point that fans who follow Colbert will no longer recognize his very distinct use of seemingly conservative sarcasm as a tool to make pro-liberal points?

Only time will tell—and the PR, marketing, advertising and watchdog/whistle blower worlds will be watching ever-so closely.

Alexis Anderson is a Senior Communications Director who admits to not being able to stay awake late enough to catch Jimmy Fallon live but can’t wait to observe the evolution of late-night via Twitter and weekend Hulu Plus catch-up sessions.