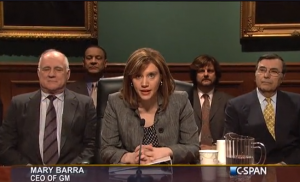 General Motors (GM) continues to take its lumps in the media, social media and in popular culture (a recent spoof on Saturday Night Live) related to the recall of more than 2 million cars, the Chevy Cobalt, for faulty ignition switches. The issues were first uncovered in 2001, but recalls didn’t begin until earlier this year. One of the key factors that prompted congressional hearings is misleading language that didn’t elevate the faulty ignition switches to a “critical fix.”

In particular, an article in Forbes points to a culture where confusing or vague language (hint, euphemisms) may be responsible for the inaction of leadership within the company.

The problem with the ignition switch had been labeled as a “customer convenience” issue. Those two words left people with the impression that the problem simply annoyed some drivers instead of giving GM experts and managers the more accurate assessment that the problem was a major safety defect that could potentially kill people.

During the same decade that the Cobalt issue had been largely ignored, GM issued hundreds of recalls at “great expense” to the company because those problems were framed as “safety defects” that prompted immediate action. The two words—safety defects—triggered a fast response. The Cobalt’s “customer convenience” issue led to “no sense of urgency, right to the very end.”

Think about it this way. On April 11, 1970, Apollo 13 commander James Lovell contacted the NASA control center and said, “Houston, we’ve had a problem.” He didn’t say, “We have a matter that’s not performing to design.”

GM has of course made changes due to the latest black eye. It created the Speak Up For Safety program, designed to encourage employees to identify, report, and elevate safety issues, and train them how to do so.

As communications professionals, many times we’re all guilty of “corporate speak” that is laced with jargon or has been edited by committee, so much that the true message is lost. Following are some tips for communicating in a crisis that we share with our clients: