Some mistakes don’t just go away.

Back in June of 2012, coffee giant Starbucks committed a serious faux-pas in its Ireland market by tweeting:

Most Irish consumers are fairly sensitive about being independent and do not consider themselves to be at all “British.” Once this tweet went public, reaction was swift and highly negative, producing coverage on major local media as well as internationally. Stories appeared on the Guardian as well as across the pond at MSNBC, the Huffington Post, CNBC and others.

Coverage of this social media misstep produced news stories that appeared as the top search results for common branded Google searches such as “Starbucks Ireland.” Previously, this search returned lists of locations where locals and visitors could find a coffee shop. Following the tweet, this search on Google returned a flurry of stories and musings about how Starbucks had insulted its Irish customers. These stories also allowed irate Irish coffee consumers to vent their frustrations in each story’s comments section, giving further strength for these items to appear as highly placed search results. This accidental insult caused Starbucks to lose a great deal of positive exposure on the search engines – particularly for branded search terms it dominated with good, brand-building links.

Starbucks management of course apologized profusely for the error, but has had to do some damage control that two years after the incident, is still ongoing. Facebook and other social properties appear to be very active and the company appears to have strengthened its presence in local directories – some of which appear as search results that push the negative content further from view.

Where is it Now?

Over two years later, a search for “Starbucks Ireland” on Google.ie still produces a reference to the entire episode – although now appearing as the sixth result. US based Google searches return this result at position 12. The result is a two-year old article covering Starbuck’s apology and a history of the incident that appears on The Journal.ie, an Irish online publication.

The Incident Isn’t “Over”

Although #6 may not be where the company wants this item placed, it is a far cry from the 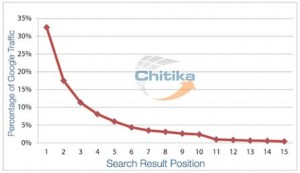 individual stories that dominated the search following the errant tweet. Pushing negative content further down on key searches can limit the exposure it receives and thus limit the reputation damage. Most search engine users will not scroll past the first page of search engine results. Most in fact will only view what they see when the search results first appear. Still, there are some that will scroll down the first page and click on the lower ranked results. According to a recent study by Chitika Insights, results appearing in the #6 position can still receive 5% of the total number of clicks for a given search. This leaves Starbucks Ireland with a little work yet to do on a two-year old problem.

What to do now?

Of course the best reputation management strategy is to prevent these problems from occurring. Once out in the internet world though, these events can have a very long life and can influence reputation and perception well into the future. Effectively managing a reputation problem requires a comprehensive approach, including Search Engine Optimization, social outreach, creative and ongoing communication and PR strategies that can present positive information in a form to balance negative content. In this instance, Starbucks work with its Facebook and other online properties should mitigate the negative content over time. But.. the road to recovery can be long and hard in online reputation matters.