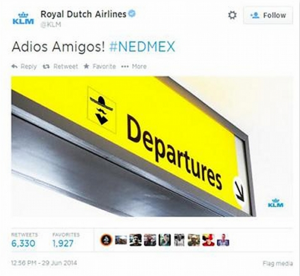 Royal Dutch Airlines (@KLM) recently ruffled some international feathers when it tweeted “Adios Amigos #NEDMEX” with a photo of a mustached man in a sombrero in response to the Netherlands’ victory over Mexico in the World Cup. The tweet was only up for 25 minutes before it was deleted, but the damage had been done. Just another example in a long line of tweets that cross the line from “clever” to “offensive.”

Brands and organizations everywhere continue to push the Twitter envelope in an effort to get noticed. But how do they walk that fine line without crossing it and risking embarrassment, ridicule and even a loss of customers? 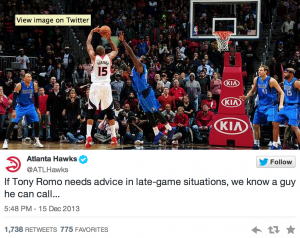 The flip-side example we frequently like to talk about in the GFM Digital Den is the NBA’s Atlanta Hawks Twitter handle. The team (and its social media community manager) frequently tosses out hilarious, yet snarky tweets. Their take is “we want a reaction, positive or negative.” In that sense they’ve defined their voice, and have a pretty good check and balance on what’s brand-appropriate and what goes too far.

When thinking about that check-and-balance for your organization, here are five tips for quickly deciding whether or not a tweet will be funny or potentially disastrous:

1)   Know your voice. If the tweet you’ve got in mind is completely out of left field for the brand/voice, you should probably reconsider.

2)   Listen to the voice in your own head. If it gives you pause at all, you should probably step away from our computer. Run it by someone else in your organization, or even better, several people for second and third opinions.

3)   What will your core audience think? You know they’re smart, so make sure you’re being authentic, and don’t underestimate their intelligence. If you’re trying to stretch the truth, don’t expect to get away with it.

4)   Be aware of the timing/context of what’s going on in the world. This is somewhat of a no-brainer, but check for breaking news before you tweet.

5)   What’s the worst that could happen? If the reward outweighs the risk, you’re probably in good shape.

Jim Licko is a vice president at GroundFloor Media and a pretty big fan of snark on Twitter…when used appropriately.