Bandwagon Fans and Social Media: Why Quality Is Better than Quantity 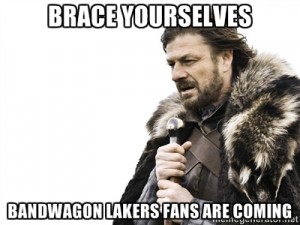 As a hardcore Denver Nuggets fan, one of the most horrible things I can imagine is going to the Pepsi Center to watch my Nuggets take on the Los Angeles Lakers. For the past decade, the Lakers seemed to be the team that would perennially knock the Nuggets out of the playoffs and remind me that it’s a long hard road for a small market team in the NBA. It wasn’t watching Kobe Bryant’s smug face that would upset me, though.  It wasn’t even the fact that the referees clearly favored the guys in purple and gold. No, the absolute worst thing about playing against the Lakers is walking through the doors of “the Can” surrounded by thousands of Lakers “fans” who probably couldn’t tell you the names of the starting lineup.

Bandwagon fans are like mercenaries. They represent whichever team offers them the best chance of victory celebrations and star power. They’re paid in winning percentage and don’t have to do much in return. Buy a jersey, learn a couple names, maybe even follow the team on social media.

With the recent decline of the Lakers, I’ve noticed a slip in bandwagon attendance, but I know that doesn’t mean they won’t return. Bandwagon fans are the germs of the sports world. They never really go away and they’re everywhere.  I’m already prepared to see those purple and gold jerseys infiltrate the Pepsi Center in a few years when the Lakers undoubtedly acquire new stars to replace the old ones. It will happen. It always does.

But how do these fans influence a team’s presence on social media? The glamour teams of the NBA have far more followers than the others, but are they really engaging more people? Or is following a team on Twitter akin to donning their jersey once a year at a game and pretending you know what’s going on? I thought about this more after the recent news that LeBron James decided to return to Cleveland instead of continuing his career in Miami.

Currently, the Heat have 2.67m Twitter followers, while the Cavs have only 387k. A huge part of this is Miami’s recent success (they’ve won 3 titles in the past 8 years. Cleveland has never won.), and to be fair to the bandwagoners, it’s more fun to cheer for a winning team. However, follower engagement shows us that the two franchises aren’t that different when it comes to social media success.

Though the Heat have far more followers, most of their tweets get shared and favorited by the same number of people as similar posts by the Cavs. Below are 2 examples:

My guess is that those bandwagon fans are to blame for the disparity. They like the team enough to follow them and maybe share or favorite major tweets, but for your average post about NBA Summer League, only the real fans give a damn.

This isn’t going to make NBA teams wish they had less bandwagon fans (somebody has to buy all those Kobe Bryant jerseys), but it does show that brands should be trying to attract true fans on social media if they want more significant engagement. Your image on social media should reflect what your true supporters know and love about your business/organization. Those are the people who will stick with you during a losing season and cheer loudest when you win.